An approach by two military organizations drove Tecnam to launch an evaluation of a two-seat, single-engine jet aircraft for the trainer market, says Tecnam director of US sales Shannon Yeager.

Tecnam has signed non-disclosure agreements with the militaries involved in the P-Jet project, so cannot yet reveal their identities. Yeager says only that neither military organisation is American.

The Italian-based general aviation manufacturer launched initial conceptual studies in May. That should be followed in 2016 by the launch of a design criteria phase, he says. A formal schedule has not been released, but generally-speaking Tecnam usually delivers a new aircraft about 3.5 years from programme launch, he says.

A concept drawing shows a small turbofan engine mounted on a pod atop of the fuselage between the canopy and a twin-tail vertical stabilizer.

The podded engine configuration is so far the only detail about the propulsion system that has been decided, Yeager says. Tecnam is still evaluating requirements for thrust, weight and specific fuel consumption, he adds.

A civilian version of the aircraft is expected to follow introduction of the military trainer, Yeager says.

The company intends to design pressurized and unpressurised versions of the P-Jet.

Asked how the P-Jet compares to the twin-engined Textron/AirLand Scorpion, Yeager replies that the P-Jet will serve a different market. The P-Jet will have hard points, but it will not be intended to serve in the light attack role, he says, though it could be use for surveillance missions. 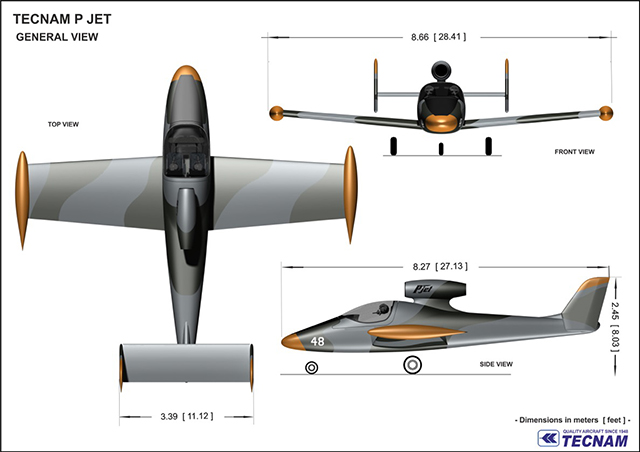