French investigators believe a controller unnecessarily attempted to optimise runway use at Strasbourg by allowing a Bombardier CRJ700 to take off while an approaching Boeing 717 was close to touchdown.

When the 717 crew chose to conduct a missed approach, it came into conflict with the CRJ700 during its climb. French investigation authority BEA says the two aircraft, at one point, were separated by 0.4nm horizontally and 50ft vertically.

While the controller spoke with the Volotea 717 crew in English, says the inquiry, he communicated with the Hop CRJ700 crew in French.

BEA points out that, during the airprox, when the crews were handling dynamic flight phases involving high workload, “it was difficult for [them] to perceive, analyse and follow the instructions from the [controller], especially since they were given in different languages”.

Arriving at Strasbourg on 12 April last year, the 717 had been just 2nm from the threshold of runway 05 by the time the CRJ – having previously been offered the opportunity to depart – lined up on the same runway.

“Unbelievable,” the 717’s captain mentioned over the radio frequency.

BEA says that the CRJ crew had been concentrating on take-off preparations and, although there had been multiple exchanges in English between the controller and the 717, the CRJ pilots were “not aware” that the aircraft was on final approach.

As the CRJ commenced its take-off roll, the crew of the 717, which was 0.9nm from the threshold, told the controller that they might execute a go-around.

Even though the controller told them to continue the approach, the 717 crew opted to initiate the go-around at a distance of 0.58nm, with the CRJ still travelling on the runway 780m beyond the threshold. 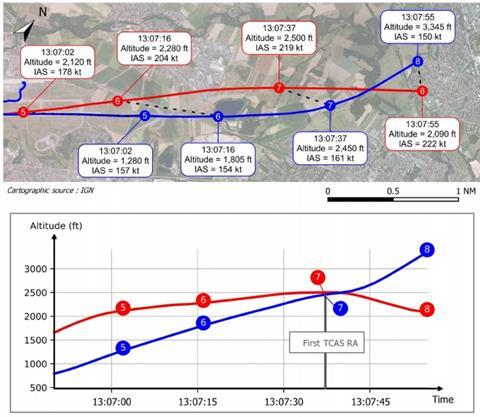 The 717 crew was instructed to maintain a straight-ahead course but the crew instead selected a heading of 042°, causing the aircraft to deviate to the left of the centreline – and ultimately exacerbating the subsequent conflict with the CRJ.

“The reason behind the selection of [this heading], different from the runway magnetic heading, could not be explained,” says the inquiry.

Shortly after the CRJ lifted off, its crew was told to turn left towards the MIRGU waypoint for the standard instrument departure. It began the turn at 2,100ft.

Although it had been above and behind the CRJ, the 717 was travelling 60kt faster and closing the distance between the two aircraft horizontally as the CRJ – climbing faster than the 717 – closed it vertically.

The controller asked the CRJ to stop climbing at 2,000ft even though the aircraft had already passed this altitude, around the point when the collision-avoidance systems of the two aircraft began to activate. The CRJ crew received a ‘maintain climb’ instruction, which then strengthened to ‘increase climb’ while the 717 crew was instructed to descend.

BEA says the minimum horizontal separation of 0.17nm was reached a few seconds later, with the aircraft separated by 500ft vertically, before the conflict was resolved.

The inquiry found that the controller had allowed the CRJ to depart ahead of the 717 because he had wished to optimise the runway use – even though there was no need – and failed to anticipate the risk involved.

BEA says a ground controller had “expressed his stupefaction” to the controller after seeing the CRJ approach the runway with the 717 so close to touchdown.

Air traffic controllers are entitled to approach regulatory minima when necessary to maintain an orderly flow of traffic, says the inquiry.

“But this should not be done systematically due to the ensuing risk of exceeding them,” it states. “The optimisation of the use of the runway and the search for operational efficiency must not take precedence over the prevention of collisions.”

Using English as the sole communication language “might have meant” that the 717 crew would have been aware of the nature of the instructions to the CRJ, says BEA, enabling the pilots to adapt their flightpath accordingly.

“However, it is not possible to determine if the monitoring of the few exchanges which followed the take-off clearance, made by the crew of the [CRJ] during the take-off run, would have resulted in better situational awareness if only English had been used,” it adds.

While none of the 195 occupants on board the two jets was physically injured, the incident triggered a stress reaction from one of the Hop cabin crew – who had been involved in a previous serious incident while working for another operator – and resulted in his being incapacitated for the duration of the flight.