A Chilean air force Lockheed Martin C-130 Hercules transport headed for a base in Antarctica crashed somewhere over Drake Passage on 9 December with 38 people aboard.

The military aircraft was headed to Antarctic outpost Base Presidente Eduardo Frei Montalva when radio contact was lost at 18:13 local time, says the Chilean air force on 9 December. Santiago declared the aircraft crashed about seven hours later on 10 December. 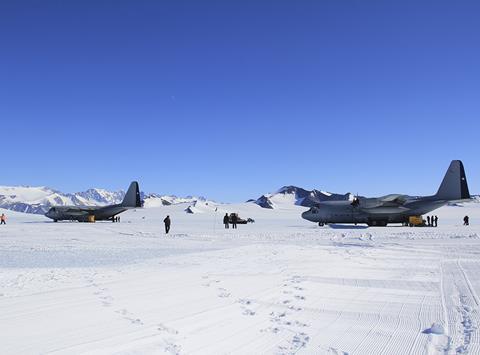 “The aircraft was carrying out logistical support tasks, transferring personnel for the revision of the floating fuel supply pipeline of the base and for carrying out anticorrosive treatment of national facilities in the area,” says the Chilean air force.

Base Presidente Eduardo Frei Montalva is located on King George Island off the Antarctic Peninsula and is used for scientific research. It is typically resupplied via a snow-covered airstrip by C-130 and DHC-6 Twin Otter transports, says the Chilean air force.

A multinational search and rescue effort is underway for possible survivors in the area of the last radio broadcast using aircraft, ships and satellites. Argentina, Uruguay and the USA are assisting Chile in the search effort.

No survivors have been found. The aircraft was carrying 21 passengers and 17 crew members.