FORECAST: In space, nobody can hear you on Mars

The most exciting thing to watch in spaceflight in 2015 will not, of course, actually happen in 2015 – or, probably, in anything resembling the foreseeable future. Sorry space people, but nobody is going to Mars.

NASA’s PR machine has been working overtime to make it seem inevitable, billing the 5 December test flight of its Lockheed Martin-built Orion capsule as the first step in a Journey To Mars. The twittersphere went into overdrive during the short flight – two orbits and a Pacific splashdown – and Americans had plenty to be proud of. NASA, after all, did what it is supposed to do: high-tech to perfection. And the prospects are exciting – Orion will not carry a crew until at least 2021, but while all other current and in-development spacecraft can go no further than low-Earth orbit, this new machine is designed to lift crews to the Moon and beyond.

But while Orion (pictured) is a very nice spaceship – think Apollo on steroids, for four astronauts and with better avionics – and it will have the biggest, most powerful rocket in history to heft it into the beyond when the Space Launch System gets flying from a planned 2018, Mars remains about as far away as, well, a distant planet with no food, air or water. 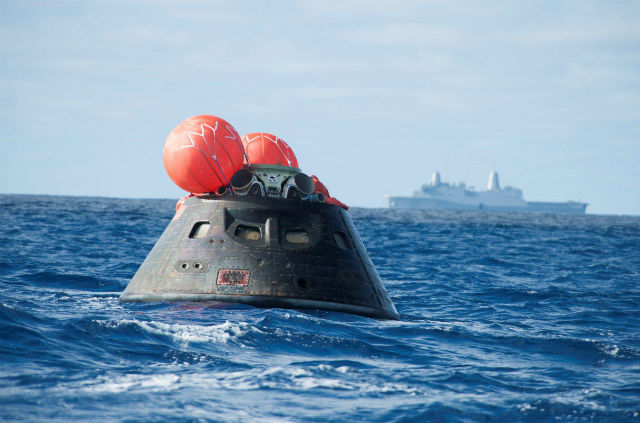 Technical challenges abound. Radiation protection is a serious issue, as heavy doses from a big solar flare could outright kill a crew in deep space, while the low doses they would get in any case do nasty things like erode bone density. No life support system exists which can keep people alive for a very long time without top-ups from Earth. Fuel for the return leg probably needs to be made on Mars.

A Mars return trip is at minimum an 18-month commitment, and the best that can be said is that some ideas of how to resolve these issues are promising.

Arguably, the biggest hurdle is money. Year-in, year-out, NASA’s budget is about $17 billion, and spending every penny of it on Mars development between now and 2035 or so – when the roadmap to Mars could supposedly get people to the red planet – is neither practical nor adequate. Money, manpower and technical input is needed from international partners. The European and Japanese space agencies are keen enough, but nobody’s taxpayers are likely to put up with pouring vast sums into what is going to seem like a very, very distant – and possibly elusive – objective.

Meanwhile, 2015 may be mostly characterised by work on far more achievable projects. Boeing and SpaceX will continue development of their CST-100 and Dragon human-rated capsules, which should carry crews to the International Space Station from 2017 – an eventuality of no small significance to those Americans who are galled by NASA’s post-Shuttle reliance on buying rides on Russian Soyuz rockets.

The European Space Agency closed 2014 with a vote of confidence from its member states’ governments, and so pushes into 2015 with full funding behind its ExoMars rover missions, to launch in 2016 and 2018. The Ariane 6 programme – aiming to replace the hugely reliable but expensive Ariane 5 with a more cost-efficient rocket from about 2020 or 2021 – has also been given a second-stage green light, so expect technical details to be fleshed out around mid-year.

Critically, a proposal by Airbus Defence & Space and Safran to form a joint venture to consolidate the Ariane programmes and streamline the European launcher programme's industrial structure also got the nod. Ariane 6’s solid-fuel and modular design is impressive, but easy to achieve compared to the overhaul of a rocket-building system defined by European consensus politics, rather than any industrial sense. Good luck to Airbus and Safran – which fortunately are showing much backbone and have the backing of France, which has historically led Europe’s launcher programmes.

Down on the ground, ESA director general Jean-Jacques Dordain will retire on 30 June. Dordain has been a most able leader and will be missed for his political skills as much as his mission focus, not to mention his endearing sang-froid. However, he will leave ESA in the sure hands of Johann-Dietrich "Jan" Wörner, head of Germany’s DLR aerospace agency since 2007.

Wörner is the obvious choice - and a good one, given his proven ability to marshal a wide range of resources from many partners. But what makes his appointment really exciting is his belief that we are all at the beginning of a new stage of a long-running industrial revolution, in which progress depends on a shift from public acceptance of new technologies, to public support for new technologies. To Wörner, then, nothing substantial can happen without public engagement; the key to progress is for politicians, scientists, engineers, business people and organisations like DLR and ESA to recognise that the public is a driver of technological solutions, not just a receiver of them.

Wörner's stewardship also promises to continue Dordain's legacy of an ESA which shows the way when it comes to realising projects that rely on deep-rooted, reliable collaboration - such as the International Space Station or, perhaps, a Journey to Mars.