NASA has selected Orbital Sciences Corp (OSC) and Space Exploration Technologies (SpaceX) to provide independent cargo re-supply services to the International Space Station (ISS) from 2010 through 2016. PlanetSpace, a grouping of Lockheed Martin, Alliant Techsystems and Boeing, also bid for the work but did not win a contract.

OSC and SpaceX, both of which have separate NASA commercial orbital transportation (COTS) space act agreements to develop ISS resupply services, are each to deliver 20t of pressurized and unpressurized cargo in total to the orbiting outpost over the period, with SpaceX delivering its cargo share through 12 launches from the Kennedy Space Centre in Florida and OSC with eight launches from NASA’s Wallops Island launch facility in Virginia.

NASA Associate Administrator for Space Operations, Bill Gerstenmaier, says the commercial services will initially supply 40% of the cargo needed to sustain the ISS in 2010, ramping to 70% by 2013.

OSC will use its Taurus II booster with the Cygnus space manoeuvring vehicle, both developed under the COTS initiative, for launches starting in 2011 under the $1.9 billion contract. 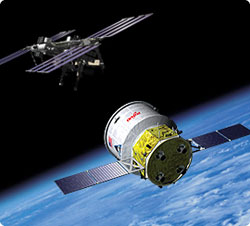 SpaceX’s $1.6 billion contract includes the company’s Falcon 9 booster topped with the Dragon cargo capsule and trunk, both of which are being developed under the COTS program.

NASA has not yet decided what mix of cargo will up sent up to the station, or exactly what equipment will be returned to earth in the vehicles. Both companies will use generic docking ports with the ISS robotic arm performing the final docking.

Gerstenmaier says NASA has the ability to “on-ramp” another contractor at a later date if one or both companies have problems meeting schedule, thought “there’s really not a backup plan” in place. “We selected companies we thought had a good chance of making it,” he adds.

Worst case, Gerstenmaier says adjustments to ISS crew and research programs could be made to weather re-supply issues, as was done in the aftermath of the space shuttle disaster.