The Spanish air force has agreed with Airbus Defence & Space to acquire an initially reduced fleet of 14 A400M tactical transports until a funding solution can be found for the remaining 13 of the type Madrid has committed to buy.

Speaking at SMi's Military Airlift and Rapid Reaction Operations conference in Seville on 1 December, Maj Gen Pablo Jose Castillo of the air force’s air mobility command, said 14 A400Ms will be delivered to Spain by 2022 after which a decision will have to be made on how to proceed with the remainder of the acquisition – postponed until 2024.

The air force is struggling to fund the full acquisition and is in discussions with Airbus regarding its plans. Spain is contractually obliged to proceed with the full fleet, and a decision to reduce the buy or sell the remaining 13 aircraft to other customers would have to be agreed by the manufacturer and the Spanish government.

Despite this, Airbus says it “greatly welcomes” Spain’s decision to restructure the delivery schedule.

“This agreement brings clarity to the A400M production schedule into the next decade and ensures that the transformation of Spain’s air mobility fleet through the introduction of the A400M is conducted in a measured and sustainable way,” notes Airbus.

The first aircraft destined for Spain is due to be delivered in 2016, with its wings having arrived at the final assembly line in Seville in October, and under the new plans nine roll-on mission kits for the type will be provided that can be used on any of its 14 examples. That will include a defensive aids suite, satellite communications and in-flight refuelling pods.

“We expect to have at least nine fully operational aircraft,” Castillo says. “Nine is the magic number for us.”

The total number of A400Ms on order for all countries is 174, but Castillo notes that several nations are reassessing their acquisition to try and work out the ideal fleet size. 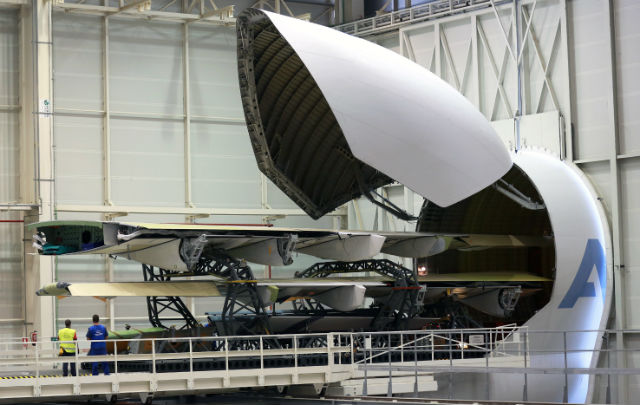 Castillo also reaffirms Spain plans to acquire three Airbus A330 multi-role tanker transports. A contract for these had been expected during 2015, but this is likely to be pushed back to next year, due to a general election in the nation on 20 December.

“We are working hard to have the A330 in our inventory,” Castillo says. “The solution isn’t easy because we have limited money – that is clear.”

Meanwhile, a multi-mission capability for the Airbus C295s the Spanish air force already operates is being discussed by the air force and manufacturer. This could include maritime surveillance and anti-submarine warfare capabilities, plus the ability to support special operations forces.

Spain operates a fleet of 13 C295s that are between seven and 14 years old, Flightglobal’s Fleets Analyzer database shows. These could be reconfigured, or new examples acquired for the multi-mission role.