Air New Zealand is in the process of adapting its "Skycouch" economy sleeper seats to keep small children secure with seat belts throughout their flights.

Today, passengers travelling with children aged up to two years have to put them on their laps, with a seat belt extension, when the seat belt signs are switched on.

Now the airline has developed, in partnership with UK engineering firm SWS Certification services, a baby pod for infants and harness for small children. This allows young travellers to stay in a sleeping position throughout their flight. 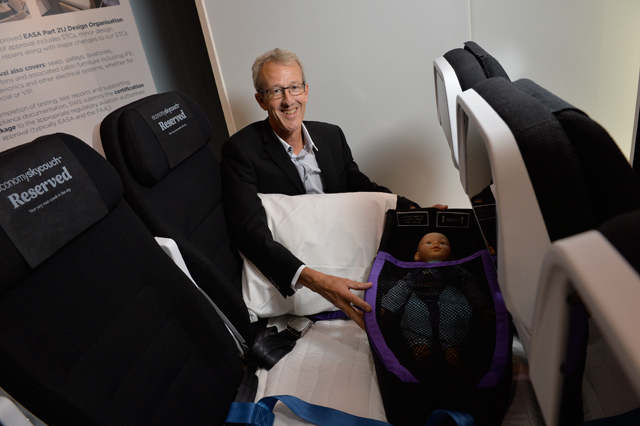 Air New Zealand head of aircraft programmes Kerry Reeves expects an expanded supplemental type certificate (STC) for the adapted seat belt system to be granted by June, and the product will be launched later this year.

The new STC will also allow two children to stay in the sleeping position side-by-side when the seat belts signs are on, which is not currentlypossible.

Reeves says the airline is preparing its Boeing 777 and 787 fleet in order to be able to be able to quickly fit the adapted seat belts once the expanded STC has been received.

The seats are equipped with leg rests that fold up by either 60°or to form a fully-flat surface, and were introduced in 2011.

Meanwhile, the carrier has licensed the sleeper seats to China Airlines, Brazilian operator Azul Airlines and Air Austral in France.