The next step: airline alliances look towards antitrust immunity

Barriers have fallen, skies have opened, and limits on investment and ownership have loosened in a decade that has marked an ever more liberal aviation world. But the global alliances formed just 10 years ago as a way around these once formidable barriers have become a permanent fixture, far outlasting what some had thought would be a temporary lifetime.

The alliances now seem to be on the cusp of maturity, collectively accounting for more than half of the world's total airline capacity and carrying about two-thirds of the world's air travellers. They have gone farther, and done so faster, than most observers thought possible back in 1997. Indeed, the alliances have even surprised their architects. Star Alliance chief executive Jaan Albrecht says: "The sceptics who said that Star was just a marketing gig and that it would last only a few years have been proven wrong, and we have grown almost beyond our original hopes." 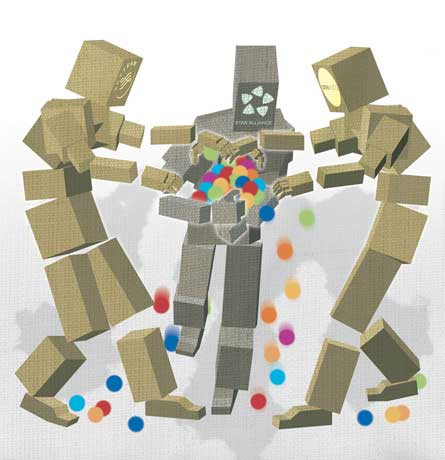 The sceptics, Albrecht recalls, saw the alliances as a way to present a traditional old-fashioned codeshare to the flying public and, in particular, to corporate travellers, wrapping up these plain vanilla pairings with marketing slogans, and promising something more than they were.

For the airlines, the alliances were also something of a subterfuge. They were a way to get around, over, under, or through the regulatory and aero-political barriers to creating truly international global networks. The first modern alliance - an early 1990s joint venture between KLM and Northwest Airlines, a venture born more of desperation than of hope - had shown that two carriers with a limited presence in each other's home markets could leverage the power of their hubs from a domestic strength to an intercontinental strength.

Breaking down barriers
The KLM/Northwest approach started to weaken some of these barriers when the US authorities lifted limits on US-Netherlands air traffic in the first big steps toward Open Skies across the North Atlantic. Now, more than 15 years since the KLM/Northwest pairing - a deal that led to a truly indivisible joint venture - the North Atlantic as a whole is on the verge of true liberalisation. This, in turn, is "the greatest change and challenge for alliances in a long time", says oneworld managing partner John McCulloch. With the advent of a fundamentally liberalised regime for air traffic between US cities and European Union cities next March, the alliances, already in control of most of the 37 million-plus US-Europe passenger traffic, are poised to move to the next step.

Following the lead of Star, which is based around an immunised core, both oneworld and SkyTeam are moving toward networks based on antitrust immunity for scheduling, pricing, yield-management and co-ordination among core members for their North Atlantic routes. Indeed, the SkyTeam group, the first alliance with multiple members within a single nation, seeks to become the first with immunity among two members in one nation. SkyTeam would win the immunity shield for both Delta Air Lines and Northwest, as well as for most of its other members.

Alliance members are ebullient about the possibilities. Jim Whitehurst, Delta's chief operating officer and a candidate for the top job at the airline, says: "The power of antitrust is not about pricing. It is about maximising and optimising your flow over the hubs." Whitehurst chides the critics who see antitrust immunity as way to raise fares: "If you're seeking the seamless service that is the goal of alliances, fewer, better-timed flights, not higher fares, are your goal."

McCulloch adds: "An alliance's greatest power is to increase revenues jointly rather than to save members on spending collectively." Whitehurst explains the power of antitrust: "You have to be able to sit down and discuss scheduling and capacity so you can offer the broadest network benefits to your customers. Antitrust gives you a way to present global access to your customers, especially the corporate customer." These customers are increasingly seeking a single point of contact and a single airline partner or alliance partners for their global business.

It is the corporate travel customer, the big multinational corporations and others who spend millions a year on travel, that have become major drivers of the alliances and their growth strategies. Albrecht of Star says the "corporates were among the early sceptics about alliances, but now they are coming to us and seeking to work with us". The corporates have begun to turn to alliance sales teams and products, explains McCulloch, in part because even when the alliance does not have a member in a certain country, it has service there and can offer both an attractive fare and, of paramount importance to the executive level corporate traveller, consistent status-recognition throughout the alliance.

"For instance, at oneworld we don't have a member in Canada, but because we offer the same elite-level lounge and frequent flyer privileges on all members, we can put a Canada-Asia passenger on a Cathay Pacific flight or on an American Airlines flight through one of our hubs," says McCulloch.

To advance alliance-wide sales, the three groupings are developing corporate portals that offer a single point of contact and, importantly, a single point from which the travel department can track its compliance with its airline contract requirements on minimum use and the like. In May, SkyTeam unveiled a corporate travel portal, SkycorpDirect.com, which lets employees book themselves on flights operated by the three SkyTeam US members.

It is the first joint airline-sponsored corporate travel site, according to Northwest sales executive Steve Sear. At oneworld, says McCulloch, global corporate sales for 2006 rose by two-thirds and revenues from its businessflyer programme tripled. The programme is aimed at small and medium-sized businesses in five key European markets and now has in excess of 5,000 accounts from members.

For the alliances to fulfil their global claims, they must meet the challenge of coverage. Star, Albrecht says, already covers most of the globe and sees "a few white spots on the map that we will be filling in". The largest white spots remain India and Latin America, says Albrecht, and Star has had to scramble since its Brazilian member, Varig, left the alliance and entered bankruptcy in early 2007. Star members have signed multiple bilateral agreements with Latin carriers, notes United Airlines alliance planning executive Michael Whitaker, who says the region is still in flux.

Latin ambitions
In Latin America, the alliances have pinned their hopes on the multinational and super-regional airlines developing within the region, a trend Albrecht says should help provide coverage. For instance, Star's United has a growing relationship with multinational Grupo TACA as well as United's own growing Latin network, while SkyTeam, notes Delta's Whitehurst, has Panama-based Copa Airlines as well as Delta's own Latin network, the fastest growing US/Latin route system.

Although both TACA and Copa are based in Central America, they provide coverage throughout the northern cone of the hemisphere. Oneworld, meanwhile, has Chile's LAN, with its web of regional affiliates and subsidiaries, as well as American's Latin strengths through Miami.

It is India that holds some of the greatest promise, says McCulloch. The nation has seen a dramatic increase in domestic air traffic, and its carriers are beginning to expand internationally, as planned US services by Kingfisher and Jet Airways indicate. At the same time, the large expatriate population of Indian nationals and families with strong ties to India has fed a boom in traffic in the growing US-India market, which has been exploited by the majors, such as American and Continental.

SkyTeam chairman Leo van Wijk said in June that gaining a member in India was a priority, and that the alliance had negotiated with Air India, Jet Airways and Kingfisher. While Albrecht was in India in August, he was pushing toward winning over Air India once that carrier completes its acquisition of Indian Airlines. A formal announcement could be made as early as December. In fact, Air India and Star were very close to an agreement in December 2006, when the carrier ended talks as it pursued the Indian Airlines takeover. Oneworld may be able to bag Jet Airways, which already codeshares with Qantas.

The accession of Japan Air Lines to oneworld rounded out much of the Pacific Rim region and each alliance is in the process of assimilating a member from China (China Eastern goes to oneworld, China Southern to SkyTeam, and Shanghai along with Air China go into Star). That leaves Africa, where Star has South African Airlines and possibly Ethiopian while Kenya Airways enters SkyTeam this year. Royal Jordanian became the first Middle Eastern carrier to join an alliance when it entered oneworld this year, perhaps balancing the accession early next year of Turkish Airlines into Star.

Even though alliances have grown larger and more complex, their management structures have not. "Keeping our numbers down is a mantra at Star," says the alliance, adding that the roster at Star's Frankfurt headquarters has stayed the same, around 70, despite the addition of members. At oneworld, which has always had the loosest structure of the three groupings, the alliance governance remains simple, as perhaps befits the grouping with the smallest number of members. Oneworld is in essence managed by the relationships of a few strong personalities from the member airlines, but it has a provision in its charter that allows a veto to settle a dispute. "We've never had to invoke that," says McCulloch.

Star often "enlists people from the member airlines and forms work teams and project managers", says Whitaker of United. For instance, Star shared its experts on the alliance's common IT platform, to which United will be migrating or transferring some reservations and booking functions by year-end. Star members also worked on the alliance's since-suspended common booking or alternative Global Distribution System platform. Similarly, SkyTeam members will from time to time be seconded to work teams, according to Northwest.

But alliance joint purchasing, once seen as a major cost-saving move, has "not turned out to be as robust as was once thought", says Whitaker. And, as Star's experience shows, joint IT projects are more difficult than previously thought. However, Albrecht says alliances can wrest better deals from airports through joint negotiating, and that shared fuel purchases have also saved significant cash.

Alliances have surely outlasted their doubters and spread farther than they had thought. But to see geography as the determinant of the future of alliances overlooks an important factor: modern alliances have in effect been driven by personalities and by one or two forceful executives. And when one of those personalities, ex-KLM chief van Wijk, takes on the job of alliance figurehead, it shows how much of an industry institution they have become.