Embraer’s fierce reaction to prospective suitor Boeing’s decision to bale from their intended commercial partnership is hardly surprising, given that the Brazilian airframer stands to lose heavily from the split.

While the tie-up proposal, unveiled in late 2017, might have given the impression of a hastily-shoehorned response to Airbus’s audacious swoop for the Bombardier CSeries programme, Boeing and Embraer already had collaborative interests, and a merger had genuine merits. 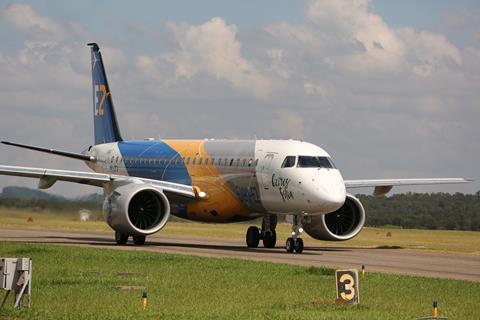 Boeing stated that the decision would “strategically align” with its commercial development, production and lifecycle services operations. A new joint venture, 80%-owned by Boeing and named ‘Boeing Brasil – Commercial’, would have handed the US airframer its own “highly complementary” presence in the regional aircraft sector with the re-engined E2 version of the Embraer E-Jet family, along with income from Embraer’s services and support arm.

Both Boeing and Embraer had separately put pressure on the CSeries, through trade and subsidy disputes. But Airbus’s intervention – and Boeing’s losing a high-profile trade case against Bombardier shortly afterwards – simply gave the CSeries, rebranded as the Airbus A220, additional momentum and the backing of a powerful partner.

Embraer’s E2 stood to gain a similar advantage under Boeing, capitalising on the US firm’s global marketing network and heavyweight presence in procurement and cost negotiation. While the A220 has flourished under Airbus, the E2 has lost traction – total orders for the family have actually declined since 2017, even discounting the specific US scope-clause peculiarities which led to the removal of 100 E175-E2s, the entire backlog for the variant, from Embraer’s books.

Absence of orders aside, the E175-E2’s planned service-entry date of 2021 reflects another key reason for Embraer’s interest in the Boeing tie-up. While the manufacturer has been exploring a complementary turboprop development, it has been looking to Boeing to provide potential post-E2 openings for its engineering personnel.

When the tie-up was initially disclosed, Boeing had just started delivering the 737 Max to customers and – with the Max the probable final iteration of the 737 – the airframer had been wrestling with options for a successor as well as a proposed New Mid-size Airplane to bridge between its single- and twin-aisle lines. Embraer would be able to offer technical specialists at a lower Brazilian cost base.

But Boeing’s aircraft development ambitions, already set back by the 13-month-and-counting grounding of the 737 Max, have been overturned by the calamitous impact of the coronavirus crisis, which has demolished the forecasts and assumptions behind the Boeing-Embraer proposal.

Not least, Embraer’s share price has halved since the outbreak and its market capitalisation of around $1.1 billion is barely a quarter of the $4.2 billion that Boeing had been set to pay just for its 80% of the commercial aircraft venture. Embraer would have had a protective put option for its 20% balance.

The tie-up had also been mired in regulatory uncertainty in Europe. Having lost its trade case against Bombardier by virtue of the CSeries having no overlap with the 737, Boeing has ironically been facing objections from the European Commission because the E-Jet family is viewed as a 737 competitor.

Embraer appears to “exert some price constraint” on Boeing and Airbus, the Commission argues, even “beyond the boundaries” of the 100- to 150-seat sector, and the regulator has expressed “serious doubts” over the merger given that it could remove a “small but important” competitive influence.

While a final ruling from the Commission has been pushed back, Boeing’s withdrawal from the deal will practically render the decision academic.

Embraer had newly-completed, in January, its ‘carve-out’ preparations to separate its commercial aviation division, ahead of the Boeing acquisition. The company disclosed in March that the separation costs relating to this carve-out, some $120 million, had wiped out its full-year EBIT.

Even as it negotiated with Embraer, Boeing had been under its own financial pressure not only from the 737 Max situation but also the broader fall in long-haul jet demand. It is cutting 787 production and orders for the 777X have barely moved in almost three years.

But coronavirus has since exacerbated the situation, carving into the crucial single-aisle market while inflicting further damage to the weakened long-haul sector. Airbus is setting the level of A320 production back by eight years and – while that does not necessarily translate to the timeframe for industrial recovery – all bets on the future shape of air transport, the market for which is being torn down and potentially reconstructed, are essentially off.

Under such conditions Boeing’s revisting the strategic rationale for pursuing an expensive Embraer deal is hardly a shock, especially following the change in the US manufacturer’s leadership in mid-January and its requests for US government funding. But the decision has – equally unsurprisingly – left Embraer frustrated, furious and bitter, its future direction another uncertainty among the myriad unleashed by the most extraordinary of circumstances.