The aircraft (EC-NOI) is the first of two A350s which Air Lease will hand over to the carrier.

World2Fly is based in Palma de Mallorca and was established last year.

“We aspire to be an international benchmark in sustainable transport, innovative, a leader in quality,” it says.

World2Fly lists several transatlantic routes to holiday resorts including Havana, Cancun and Punta Cana from Madrid as well as services from Lisbon, among them Varadero. 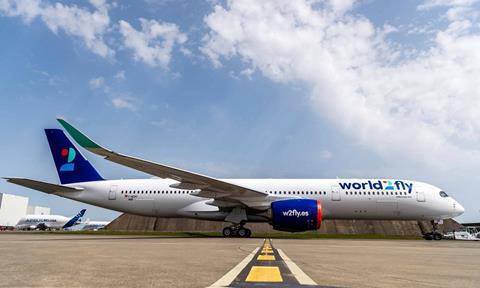 World2Fly is acquiring two A350s for its leisure services

“We are confident the A350-900 will help distinguish World2Fly in the marketplace,” says Air Lease assistant vice-president of marketing Matthew Stevens.

Airbus says the aircraft is configured with an all-economy layout comprising 432 seats.

“Passengers will enjoy more personal space, wide seats and absolute well-being on board and appreciate the latest generation in-flight entertainment and connectivity,” it adds.