While much of the attention among global alliance members has been on developing joint venture partnerships in key markets, it has still been a busy 12 months for all three groupings.

Particularly busy was Oneworld, which added four new partners – in part stemming from airline merger activity – and grew its global presence in the process.

The alliances account for just over 60% of all airline capacity, Flightglobal's Innovata schedules for September show. Star Alliance remains the biggest of the three alliances, though gap between it and its rival groupings in size has fallen after TAM and US Airways left the grouping earlier this year.

While Star Alliance remains the largest of the global alliances, the loss of two members has seen the footprint of the grouping shrink over the last 12 months.

Innovata networks data schedules show Star Alliance carriers account for 23.7% of global capacity in September, compared with 26.4% a year ago. Key to that change was the defection to Oneworld of both US Airways and TAM at the end of March. US Airways followed American Airlines into Oneworld when they eventually secured regulatory approval for their merger last year. 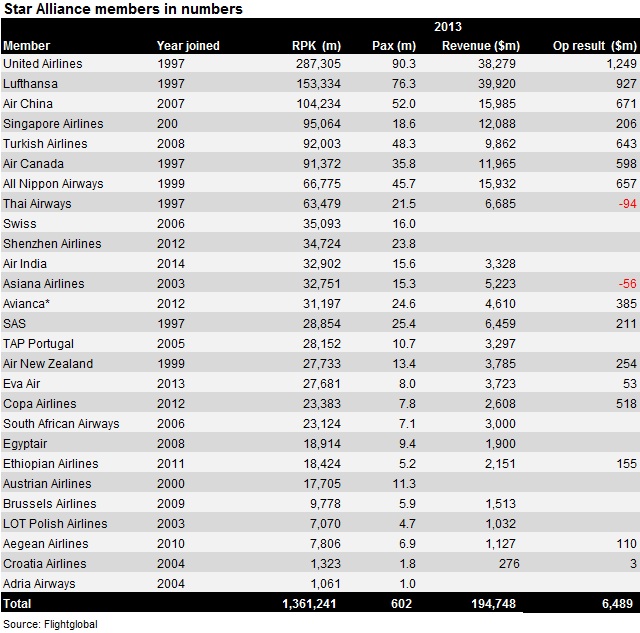 While Star Alliance still has United Airlines as a strong member in the US market, the loss of TAM left it again with a gap in the key Brazilian market. TAM opted to join its merger partner LAN in Oneworld after a lengthy evaluation. TAM, which only joined Star in May 2010, is the grouping's second Brazilian member to fall away.

Varig was a member of the grouping until its financial collapse in 2006.

Star moved quickly to invite the country's fourth-largest operator, Avianca Brazil, into the alliance. While sharing a brand and Synergy ownership with existing Star member Avianca, it has been operating outside the alliance. The carrier is due to join Star this year. Several Star members have also started co-operating with Brazil's third-largest operator, unaligned Azul, including United and Copa.

While Brazil is a work in progress, Star has finally made gains in another key target market, after Air India joined the alliance in July. The latter's on/off move into Star – suspended in August 2011 after Air India failed to meet minimum membership conditions – returned to the agenda late last year.

Joint venture activity among Star partners includes Lufthansa and Air China moving to team up on routes between China and Germany this winter.

Oneworld is reaping the benefits of a recruitment phase in which it has added four new members over the last 12 months – while securing a partner in the key Brazilian market in the process.

Qatar Airways was the first new recruit, becoming in October 2013 the first major Gulf carrier to join a global alliance. The airline, which joins Royal Jordanian as a Middle Eastern member of Oneworld, brought with it its new Hamad International hub at Doha – albeit slightly later than originally planned – in June. 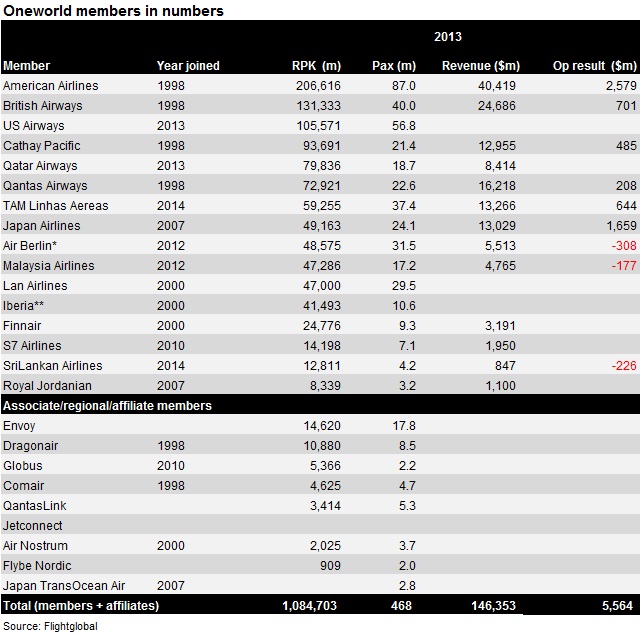 Talks are also continuing with British Airways over a possible revenue sharing venture, initially on the London-Doha route.

Qatar was followed at the end of March 2014 by the former Star Alliance pair of US Airways and TAM. Both switched camp as a result of mergers. US Airways' tie-up with American brought the airline into Oneworld, while TAM joined after a lengthy alliance evaluation process, following its merger with long-standing Oneworld member LAN.

Finally, SriLankan Airlines joined the group in April of this year.

The new members lifted Oneworld carriers' share of global capacity to nearly 18%, from 15% the previous year – the fastest growth of any of the global alliances in the last year. The alliance took its membership up to 15 airlines.

While securing TAM offered the grouping a presence in Brazil, Oneworld remains relatively short of partners in China – where Hong Kong's Cathay Pacific is its key partner – and without an Indian member after its dalliance with Kingfisher came to nothing.

Joint-venture partnerships continue to play a significant role among Oneworld partners. Both American and IAG partners BA and Iberia cite the strength of their alliance for weathering recent capacity issues in the transatlantic market, further bolstered by the arrival of Finnair and US Airways.

After a recent recruitment drive swelled SkyTeam's partners and reach, it has been a relatively quiet year for the alliance in terms of new partners.

Garuda Indonesia was the only new airline addition over the last 12 months. The airline joined the alliance in March, taking its membership to 20 carriers and further bolstering its presence in Asia. That network already features China Eastern, China Southern, Taiwan's China Airlines, Korean Air, Vietnam Airlines and Xiamen Airlines. 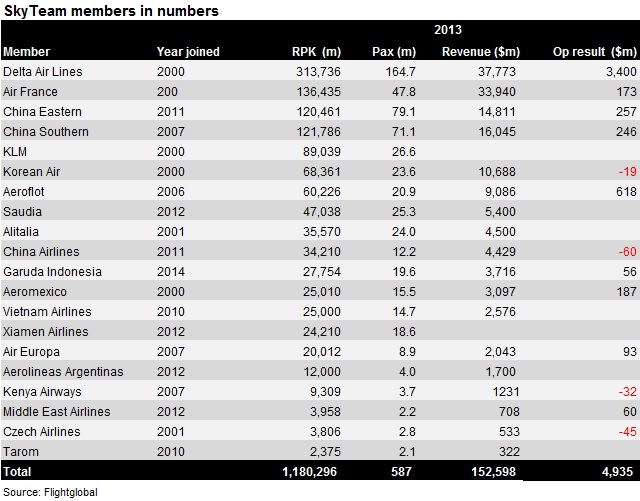 SkyTeam managing director Michael Wisbrun says "2010 to 2013 was about the getting the footprint", adding: "We were focused on getting the right membership and getting the basics right." The alliance's membership doubled in size during this period.

"We have an extensive network in greater China, the USA and Europe. The network side is close to the finish," Wisbrun adds.

While happy with the strength of its network footprint, Wisbrun acknowledges that the alliance has two "white spots" in India and Brazil.

However, he notes that the latter is partly solved by further co-operation with Brazilian low-cost carrier Gol. "It is now engaged and committed with its Delta strategic partnership and completed the engagement on the European side with Air France this year," Wisbrun says. In February, the French carrier agreed a co-operation deal under which it is investing $100 million in the Brazilian airline – similar to its earlier partnership with Delta. "Gol will play an important role in the footprint of the network of SkyTeam," he adds.

Meanwhile, earlier this year Delta launched its joint venture on transatlantic routes with Virgin Atlantic, after its acquisition of a 49% stake in the UK carrier.

Virgin remains outside SkyTeam, however, and the venture is separate to Delta's transatlantic partnership with SkyTeam partners Air France-KLM and Alitalia.

Etihad, which remains staunchly outside of the global alliances, is deepening its ties with SkyTeam's European partners by acquiring a stake in Alitalia. This builds on its existing codeshare with the Italian carrier and wide-ranging co-operation with Air France-KLM.