This year's Flightglobal Fleet Forecast predicts delivery of 41,000 new commercial turboprop and jet aircraft over the next 20 years. At 2015 values, those deliveries would be worth $2.83 trillion.

Single-aisle aircraft are forecast to account for more than 60% of those deliveries and almost 50% of that value – which explains why this sector of the market remains of much interest to the industry today.

New variants of the ubiquitous Airbus A320 and Boeing 737 families are set to enter service in the next couple of years, and with the Bombardier CSeries, Comac C919 and Irkut MC-21 also finally becoming operational realities, the sector seems poised for real change over the next few years.

But what is the real shape of that change? 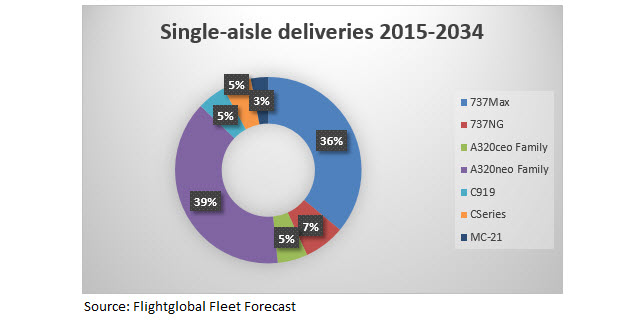 Airbus and Boeing enjoy a manufacturing duopoly in the single-aisle sector today that has endured since the latter's acquisition of McDonnell Douglas in 1997. Close to 11,500 A320 and 737 family aircraft have been delivered to airline operators globally since that duopoly was created, resulting in a single-aisle fleet of around 13,000 aircraft in airline passenger service at the end of last year.

Despite the entrance of new manufacturers, little change is forecast, with Airbus and Boeing accounting for more than 85% of the total deliveries predicted through 2034.

With today's fleets dominated by those two manufacturers, this would result in Airbus and Boeing still accounting for close to 90% of the fleet of single-aisle passenger aircraft in service at the end of 2034.

So, does this mean that the upstart manufacturers will suffer commercial failure with their programmes? Success is, of course, relative, and for the CSeries, C919 and MC-21, a combined 3,200 deliveries are predicted.

But while these programmes will each see output volumes averaging around 60 aircraft a year through their production runs, Airbus and Boeing are talking about increasing their production beyond current committed plans to each produce that number of aircraft every month.

However, the forecast suggests that demand would not be sufficient to justify such production rate increases. Under the base-case scenario, assuming global passenger capacity growth of 4.8% per annum over the next 20 years – which itself services average traffic of around 5% as load factors continue to grow globally, albeit at slightly slower rates than seen previously – together with productivity hikes driven by increasing aircraft size, sector length and utilisation, the highest monthly production rate foreseen in the single-aisle sector for any single OEM is 50 aircraft per month.

Airbus is committed to increasing production from the current 42 aircraft per month to 50 per month by the first quarter of 2017, while Boeing is committed to driving its rates from 42 to 47 by that time and further to 52 in 2018. At face value, the final Boeing rate increase appears unjustified by the Flightglobal Fleet Forecast, but it would only need a minor change in some forecast assumption – market growth, retirement rates or productivity adjustments – to absorb the slightly higher production rate.

However, further increases, potentially to 60 aircraft per month for each of the two current duopolists, would require more fundamental changes in these assumptions to find justification. Retirements of the existing fleet would have to be higher, aircraft productivity (read efficiency) would have to decline, or traffic would have to grow at faster rates than hypothesised. Or, alternatively, that supply would be absorbed by demand which the forecast currently allocates to the new OEM production programmes, thereby weakening the market imperative and reducing market penetration for those aircraft.

Finally, the Flightglobal Fleet Forecast is focused on long-term trends. No attempt has been made to predict the enduring global economic cycle which itself will impact aviation, creating its own demand and supply cycle. We are now seven years into the current cycle, which commenced with the downturn in 2008. Every cycle is of course different but previous cycles have typically lasted seven to 10 years.

So, the risk of some softening of demand over the next few years must increase as the cycle endures – perhaps coinciding with those rate increases from the two incumbent manufacturers, bringing obvious consequences for the single-aisle markets.

For a summary of the Flightglobal Fleet Forecast, click here