Airbus aircraft once used to begin life inside a Boeing, of sorts. Specifically the structures of Airbus jets would be ferried in a heavily modified version of the Boeing 377 Stratocruiser, adapted by US specialist Aero Spacelines into the Super Guppy turboprop transporter.

One such Super Guppy, the second aircraft from the Airbus Skylink operation, is displayed at the Aeroscopia museum in Toulouse. It is situated just 950m (3,120ft) from hangar L34 on the Airbus industrial complex, in which the latest generation of Airbus's outsize transporter is under construction.

Officially designated the A330-700L, the twinjet will be known as the BelugaXL, staying with the aquatic theme that began with the Super Guppy and retaining the cetaceous identity of its immediate predecessor, the A300-600ST Beluga.

The A300-600ST, originally certificated in 1995, has been central to the Airbus logistics operation for more than two decades, with five of the type transporting sections for aircraft including the A320 and A330 – and even carrying the A330 sections that would ultimately form its successor.

If its similarity to the characteristic shape of the white beluga whale isn't obvious, the livery chosen for the BelugaXL – which easily defeated five other options after a vote by Airbus employees – will underline the resemblance. Having been painted, the first assembled airframe – MSN1824 – is now set to embark on the type's flight-test campaign. 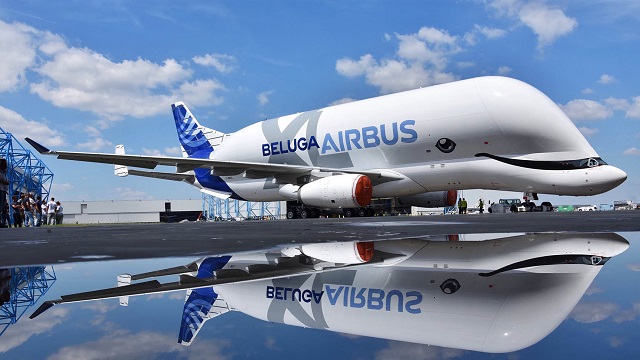 BelugaXL programme manager Bertrand George says the window for first flight is "likely to be nearer the start than the end" of summer.

The aircraft – based on a hybrid of the A330-200 and -300 – emerged from L34 in April with its high-capacity converted fuselage complete, including its forward main freight door, and its Rolls-Royce Trent 700 engines fitted.

George says Airbus took a "full-digital approach" to the aircraft's creation, but that this demanded the challenging integration of modern design technology with the developmental data of an aircraft conceived more than three decades ago.

The BelguaXL rises from a semi-complete A330 base – the central and aft fuselage, wings and main landing-gear – from which the remaining upper fuselage is subsequently removed, and around 8,000 components are installed to prepare for the fitting of the modified freight bay, able to hold 51t of payload, including a pair of A350 wings.

Longer by 4.3m than the A330-200 but slightly shorter than the A330-300, the BelugaXL has the same A330 wingspan of 60.3m. Although Airbus has managed to fit two BelugaXLs side by side in the assembly hangar, their combined span is too broad for the building, and the installation of winglets has to wait until the aircraft rolls out for ground tests.

MSN1824, with its newly fitted winglets, completed ground-vibration tests in June, during which the freighter was exposed to various stimuli to assess its behaviour under a range of flight conditions, such as wind gusts. It has also been subjected to centre-of-gravity tests, which involved tipping the empty aircraft on its main landing gear, jacking up its nose gear to lift the nose by 3.5m from the ground.

The aircraft will undergo several checks and reviews before commencing the flight-test programme which, says George, will probably take around 600h. He adds that the airframer has been cleared to carry out an interim, rather than a full, static test.

Certification will follow the "same process and the same rules" as other types, says George, as Airbus pursues approval of the BelugaXL as a derivative of the A330-300.

While the larger fuselage capacity is the primary difference between the BelugaXL and the A300-600ST, the former will also have the capability of transporting additional personnel.

The A300-600ST is limited to a crew of two pilots and three individuals on jump-seats. But the BelguaXL will be able to accommodate – in addition to two pilots and a jump-seat occupant – four personnel in a courier section behind the cockpit.

This courier section has led to regulatory consultation over the need to meet evacuation requirements.

"No passenger door from the A330-300 baseline aircraft and suitable to be used as emergency exit under all foreseeable conditions could be retained," says the European Aviation Safety Agency in a special-conditions document on the BelugaXL.

The only emergency exits available are the two sliding windows on either side of the cockpit, and EASA has outlined proposals to requiring pre-flight checks to ensure these windows are latched, and other measures to comply with safety criteria.

EASA also notes that a smoke-detection system will not be installed on the main freight deck, and that there is a need to ensure that "any fire risk is minimised" and any uncontrolled fire risk is "eliminated". It acknowledges that the BelugaXL will be limited to carrying aircraft components and subassemblies, and says procedures must make certain that fuel and hydraulic lines are drained and power supplies deactivated.

Airbus's second BelugaXL, MSN1853, is set to become the first of the new fleet to enter service with the airframer's transport arm Airbus Transport International, because the initial aircraft – equipped with heavy flight-test instrumentation – will require work to restore it to operational status.

George says that the programme is "exactly on schedule". By mid-June, preparation of the lower fuselage had been completed, including cockpit installation, and structural work had commenced on the cavernous upper shell. George expects the main freight door to be fitted after summer, and assembly to be complete by around September or early in the fourth quarter.

This second aircraft will be used to carry out the function and reliability testing, and Airbus also intends to use the jet to check loading and unloading procedures and the integration with ground infrastructure.

All the major structural components for the third aircraft are progressing, says George, and he expects assembly of this jet to begin "before the year ends".

George credits "superb teamwork" for bringing the BelugaXL together, given the fact that the programme is naturally constrained by a limited production run of just five aircraft.

"This is an investment for Airbus, with a challenge of trying to achieve this programme at the relevant cost and time compression," he says. "The team has been able to find good solutions for these five aircraft."

Once the first two aircraft are delivered next year, Airbus Transport International will receive the other three, one each year, from 2020. It will retain its five A300-600STs until three BelugaXLs have been delivered, and then begin to phase the older transporters out from 2021. Airbus has yet to decide the future of the A300-600ST fleet.

Airbus has 11 European stations to which it flies the A300-600STs and these are being updated to accommodate the larger aircraft, with its 8.8m-diameter hold. George says this work is "progressing". The BelugaXL will have a greater range than its predecessor, but is unlikely to need it.

Its fuselage design limits the aircraft to a M0.69 cruising speed, and also requires an enlarged vertical fin as well as auxiliary fins on the horizontal stabiliser to maintain aerodynamic stability.

Airbus is already reaching the operational limit for its A300-600ST fleet, particularly given the ramp-up of the A350 programme and the inability of the aircraft to transport sufficient A350 wings.

Transporting A350 components to the final assembly line requires nine times the flight time of an A320.

George says that Airbus will benefit from a substantial increase in capacity with the BelugaXL. But he says the airframer is also studying other changes to its logistics operation to achieve further efficiencies – such as the possibility of transporting three A320 wings simultaneously.

Hangar L34, the unassuming facility where this most extraordinary Airbus fleet is taking shape, was once used to test the life limits of the A350 and A380. "It will be the first time in this place that we'll create aircraft," says George, "rather than destroy them."