ANALYSIS: What hopes for the A380 on the secondhand market?

Does anybody want a used A380? A few months off the 10th anniversary of the Airbus double-deck airliner entering service, orders have virtually dried up, production will fall to one a month from 2018, and there is increasing uncertainty over whether there is a viable secondhand market for the world’s largest airliner. The superjumbo arrived as a game-changer in long-haul travel; there is now the dismal prospect of A380s not yet into their teenage years being broken for scrap.

The oldest A380s will start coming to the end of their operational span with original customers almost as quickly as Airbus delivers new ones. In late May it emerged that Dr Peters Group is considering parting-out at least some of its returning A380s. The German lessor has five aircraft with Air France and four with Singapore Airlines. Singapore Airlines has recently confirmed that it will return four of its A380s at the end of this financial year, in April 2018.

According to Flight Fleets Analyzer, 10 A380s on operating lease are due to be returned between now and 2020, including six with Singapore Airlines, three with Emirates and one with Air France. Malaysia Airlines (MAS) has already offered its six A380s for sale or lease with no takers. Instead, the superjumbos are being converted to high-density, 700-seat-plus layouts to operate in the Muslim pilgrimage market under a new subsidiary.

The now almost year-round demand for charter flights to Islam’s holy sites is certainly one option for ageing A380s – more than two million believers make the Hajj pilgrimage every year and that figure is expected to double as long-haul flights become within financial reach of more Muslims around the world. MAS will begin service with its new pilgrimage unit in 2019, after the aircraft have been fitted with around 200 extra seats to an all-economy arrangement through Airbus. 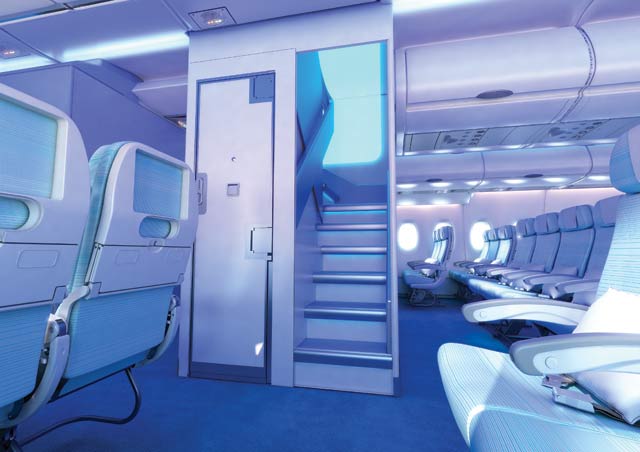 However, Rob Morris, head of consultancy at Flight Ascend Consultancy, is sceptical about the potential of the pilgrimage opportunity, partly because a variety of widebody types could be called into the role. “The reality is that this is a low-yield market and it is likely to see continued use of other written-down widebodies in addition to some A380s, rather than converting to all A380s,” he says. “It is a niche opportunity.”

Airbus emphasises the need for the A380 in a world with ever-more mega cities and rising demand for air travel, and believes orders will come – although the last big sale was to lessor Amedeo which signed for 20 in February 2014. Aside from A380 stalwart Emirates, with 48 deliveries outstanding, the backlog of just over 100 aircraft looks fragile. While not helping orders directly, a burgeoning secondhand market would bolster the type’s credibility and Airbus is confident there will be one.

The airframer has talked up the potential of used A380 sales in Africa and China, and even among blue-chip carriers. Hopes of interest from an existing A380 customer were raised when IAG chief executive Willie Walsh suggested at a conference in Dublin in January 2016 that subsidiary British Airways was looking at acquiring “five or six” secondhand A380s to add to its fleet of 12 new superjumbos. The aircraft might also be used by the group’s other carriers, he said.

Walsh is a fan of the type. “Customers love it. The aircraft works very well,” he said of the A380s in operation with BA on routes including London Heathrow to Los Angeles. However, the revelation was only good news up to a point for Airbus. The IAG boss also described the asking price for new A380s as “outrageous”, and said the airline would not be interested in taking on more new examples, including the nine options it holds with Airbus as part of its original order.

The economics of the superjumbo – whether its cost of acquisition or cost of operation – has been the A380’s biggest problem. While around a dozen other national airlines operate the type, only Emirates puts it at the core of its strategy. For most other customers, it is a niche aircraft, flying on high-density city pairs where frequency is less of an issue. Half of the A380’s customers have single-figure fleets with Singapore Airlines the next biggest operator after Emirates with just 19 aircraft.

Mark Lapidus remains a believer – at least in the opportunity the A380 offers, new and secondhand, to airlines wanting to add a new dimension to their service. The chief executive of Dublin-based Amedeo placed an order for 20 A380s at the 2014 Singapore air show, although none have yet been placed with customers. Speaking to FlightGlobal in 2016, he said Amedeo was initially focusing on the secondhand market, working with Airbus to remarket early examples of the aircraft.

There certainly will not be a glut of A380s arriving on the secondhand market in the next few years. The fact that only 41 were delivered between 2007 and 2010 means that – at least initially – the supply of aircraft will be reasonably controlled. Lapidus and Airbus hope this limited availability will avoid prices plummeting but mean there will be A380s available for airlines keen to trial the type but reluctant to commit to aircraft fresh from the production line. 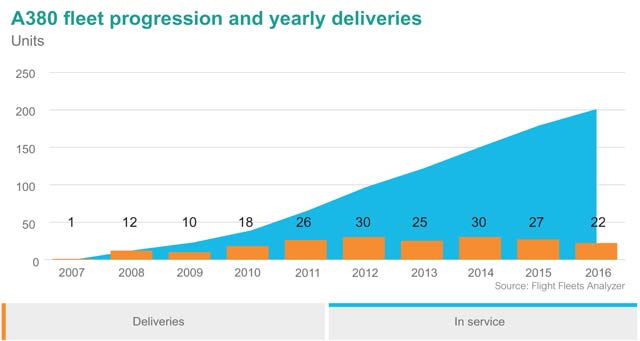 One of the biggest stumbling blocks could be the cost of converting highly bespoke interiors into the more high-density configuration that appears to be the best hope for the superjumbo in its second life. Although Ascend’s Rob Morris notes that transitioning an early A380 into an all-new three- or four-class configuration would likely be “prohibitively expensive” at $30-40 million, he concedes that converting it to a single- or two-class arrangement for a secondary or tertiary operator would be cheaper.

“Particularly if they don’t move monuments and use refurbished seats, I guess the cost could come in at well under $10 million. This means they could deliver a potentially cost-efficient aircraft for higher-density, low-yield, long-haul markets,” he says. However, he believes conversions could be trickier on some of the earliest A380s. “It will be a particular issue as these were virtually handbuilt as Airbus learned to productionise the A380,” he adds.

An admission that the world’s biggest airliner is closer to being economical at a high-density configuration than the flying-cruise-ship concepts touted by Airbus when the A380 was launched in the early 2000s came at the AIX interiors show at Hamburg in April. Toulouse unveiled the final structural alteration in a series of cabin tweaks that should increase the A380’s capacity by up to 80 seats.

A redesigned front staircase will create space for 20 more passengers and joins a package of “cabin enablers” that Airbus says will make the A380 “more efficient”. The airframer is also promoting an 11-abreast economy configuration on the main deck, as well as a nine-abreast premium economy design. Together, says Airbus, the space for 80 more passengers should equate to $12 million extra revenue per aircraft.

Airbus says the new configuration could be offered as a retrofit through maintenance, repair and overhaul organisations, as well as on new aircraft. However, Morris remains sceptical of the A380’s sell-on prospects, especially in the absence of a passenger-to-freighter (P2F) programme. “Longer term, very large aircraft markets have seen limited transitions in secondary passenger markets. The majority of passenger Boeing 747-400s that transitioned did so as P2F conversions,” he says.

Other large widebodies fared even less well. The A340 quadjet become “almost obsolete” when the fuel price rose. “Even the 777-200ER is facing problems as secondhand examples arrive on the market having to compete with new [Boeing] 787s and 777-300ERs and [Airbus] A350s,” says Morris. For Airbus, convincing airlines to invest in secondhand A380s – even at bargain bin prices – could be almost as difficult as securing orders for new ones.