The Bulgarian government gave the long-delayed go-ahead to a new fighter procurement on 30 March, which will eventually see 16 aircraft acquired to replace the air force’s ageing Russian fleet.

An acquisition plan for an affordable Western multi-role design to replace Sofia’s fleet of Russian Mikoyan MiG-29 ‘Fulcrums’ and Sukhoi Su-25 ‘Frogfoots’ has been approved, which will see a NATO-compatible fighter procured in two phases.

The first deal covers an eight-aircraft purchase, tentatively slated for delivery between 2018 and 2020 and expected to cost €511 million ($580 million). The second phase will see eight more fighters acquired between 2020 and 2023.

Before the launch of a tender, the procurement project has to be approved by the Bulgarian parliament, a stage which is expected to be completed by the end of May.

Defence minister Nikolay Nenchev has publicly voiced his ambitions to have a contract for the first new purchase inked by the end of 2016.

However, while the Bulgarian defence budget for 2016 contains a small amount of funding earmarked as an advance payment, the realistic estimate is that the defence ministry will not have time to organise and complete a full-scale tender procedure in such a tight time frame. The process of selection and negotiations with the shortlisted candidate is, therefore, expected to extend into 2017.

So far, the Bulgarian military has reviewed several options, and received detailed information on prices and availability.

The first one calls for ex-US Air Force Lockheed Martin F-16s, which would be upgraded by OGMA in Portugal, together with training from the Portuguese air force. 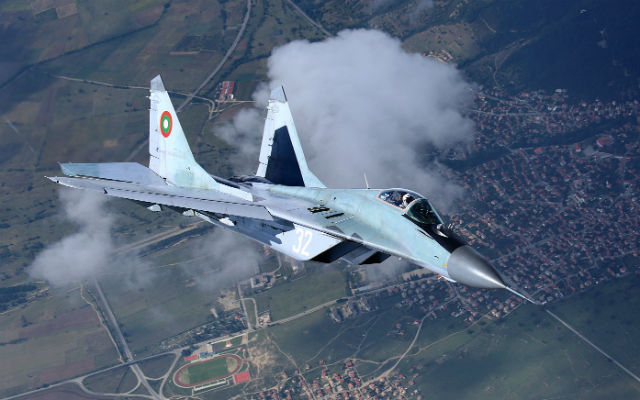 Another option would be a direct purchase of surplus F-16 MLUs from Portugal – together with the training service – with a logistics and weapons package sourced from the USA.

There is also an option, strongly backed by the Italian government, for ex-Italian air force Eurofighter Typhoons.

So far, the only option for new aircraft is the Saab Gripen. The Swedish government and the manufacturer have expended a lot of marketing efforts in Bulgaria since 2008, in an attempt to convince the Bulgarian military and political decision-makers their aircraft would be the most cost-effective.

A second major military aviation project approved by the Bulgarian government calls for investing in the MiG-29 logistic support.

The current ‘Fulcrum’ fleet is set to remain in active operation until the introduction of the new fighters, and €51 million ($58 million) will be spent on the purchase of new or second-hand Klimov RD-33 engines for the MiG-29s, as well as engine and accessory box overhaul and the procurement of parts and services needed for mid-term maintenance and airworthiness of at least 10 MiG-29s, out of 15 in service.

In 2015, the governments of Bulgaria and Poland inked an agreement covering the overhaul of six engines, at a price of just over €6 million ($7 million). In 2016, however, the Bulgarian MoD declared the Polish MoD’s aircraft maintenance capabilities lacked the capacity to grant support to the Bulgarian air arm’s ailing MiG-29 fleet and additional supply channels will be sought.

According to Nenchev, only seven of the MiG-29s are maintained in an airworthy state.

To counter the number of unserviceable MiG-29 engines, the air force’s command authorities made an extra effort to extend the time between overhauls of the fleet’s RD-33s and KSA-2 accessory gearboxes.

This way the air force would be able to provide just enough aircraft to stand on quick reaction alert for air policing missions until mid-2016 and through further extension in early 2016, it would grant Fulcrum airworthiness until the year-end.