Plextek Consulting is well under way in its work for the UK government to develop a number of technologies that will allow unmanned aerial vehicles to operate in urban environments.

Under the Defence Science and Technology Laboratory’s (DSTL) three-year Autonomous Systems Underpinning Research (ASUR) programme, which aims to develop key technologies for unmanned systems, Plextek is developing sense-and-avoid, communications and camouflage systems that are compact and power-efficient enough to be used on small UAVs.

The nature of urban environments means that data cannot be transferred via line of sight because buildings cause obstructions, so Plextek is exploring the possibility of reflecting beams off structures to enable the UAV to communicate with its ground station.

“Video is increasingly required from UAVs, and there is a demand for more resolution,” Nicholas Hill, director of defence and security at the company, says. “We are looking at how to transmit high-resolution, reliable data in a congested environment.”

Using four flat, patch antennas that each adjust by 90 degrees, Plextek is developing a small form factor 60GHz system that will be able to transmit beams to find the best route back to the ground control station over an approximate 1km range. 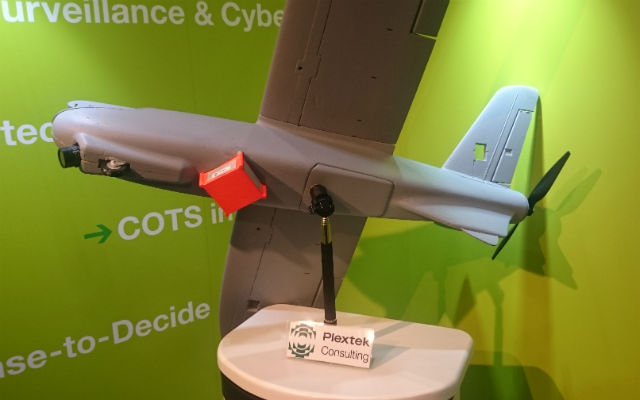 Plextek is also exploring developing a radar that can fit into a small UAV. While Hill says that the sensor of choice for a UAV is typically a camera, a small scanning radar could work alongside, assuming there is enough bandwidth available to transmit both data feeds to the ground.

The company is therefore considering the integration of radar technology into the same casing as the indirect beam communication system, which would ultimately be a sense-and-avoid system for small UAVs.

The radar is in phase 1 under the ASUR effort, while the communications system is in the second development phase, including assembly of a prototype, and Plextek is in discussions with DSTL regarding a possible third phase of development.

Another phase 1 ASUR project has Plextex working on adaptive camouflage for UAVs.

Derived from the electronic paper technology that is used in e-readers, the colours in panels on a UAV can change shade, within a certain spectrum, and DSTL is exploring the full integration of this technology into a platform's wings.

“Changing the appearance of the camouflage at the touch of a button is, arbitrarily, how to think of it,” Hill says.

Plextek may collaborate with the University of Southampton for the integration effort.