Thales’s Watchkeeper unmanned air vehicle has been successfully flown in controlled airspace under the jurisdiction of air-traffic control for the first time, completing a one-hour sortie in Wales on 30 September.

Under the Civil Airspace Integration of RPAS in Europe (CLAIRE) effort, Thales partnered with ATM provider NATS and the Netherlands’ national aerospace laboratory NLR to show how unmanned air vehicles (UAVs) can be operated alongside manned aircraft in controlled airspace.

CLAIRE is part-funded by the Single European Sky ATM Research (SESAR) joint undertaking that is modernising Europe’s ATM system. The next phase of this initiative, SESAR 2020, is due to begin by the end of 2015 and continue until around 2024, and is the first phase in which unmanned aircraft are being considered.

The flight test was organised with the support of the UK Ministry of Defence and Civil Aviation Authority, and will help inform regulatory conditions for such operations in the future, Thales says.

Watchkeeper is certified to fly in national airspace – a certification pedigree that is transferable to regulatory authorities within NATO and the European Aviation Safety Agency, according to Thales. However, infrastructure and procedures are not yet in place for it to do this.

The Watchkeeper air vehicle is routinely flown in segregated airspace in Wales and from the MoD's Boscombe Down site in Wiltshire in support of the British Army’s training on the system, but the UAV does not enter controlled airspace where routine manned flights are conducted. 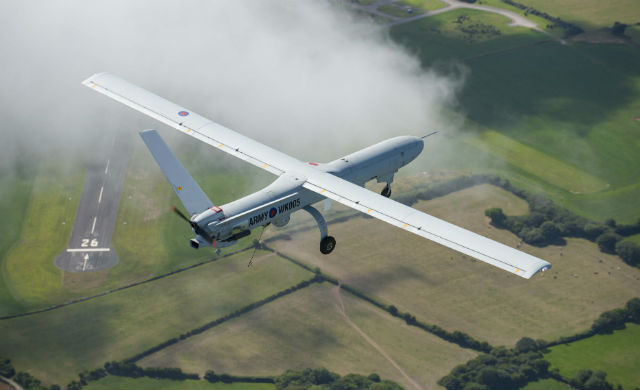 The army’s WK450 Watchkeeper – of which 54 are on order – was deployed to Afghanistan in August 2014 as UK forces withdrew from theatre.

The Elbit Systems Hermes 450-derived UAV is expected to undergo a spiral development that will see it able to take off from rough strips, and also have a de-icing capability. The programme is fully funded out to 2042.

The army is due to assume responsibility for training on Watchkeeper from this month, as it heads towards achieving full operational capability with the system – a milestone expected to be achieved in 2017. The service's programme will follow the same format as the training conducted by Thales, including classroom and theoretical instruction at a UK facility in Larkhill, Wiltshire, and live training flown from Boscombe Down, also Wiltshire.

Elsewhere, Watchkeeper X – a concept introduced by Thales in September to distinguish its product from the British Army programme – is being pitched to France and Poland for their tactical UAV requirements.