Dassault rolled-out its Falcon 5X on 2 June during a ceremony at its 64-year-old final assembly facility in Bordeaux-Mérignac, southwest France.

The milestone took place before a specially selected audience of customers, operators, suppliers and regulators. First flight of the large-cabin, long-range business jet is scheduled for the third quarter of this year. 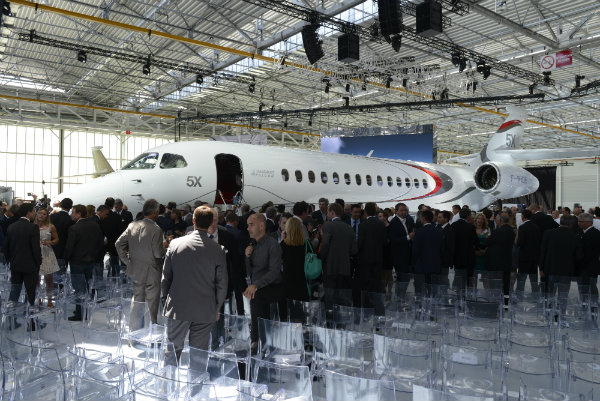 The 5X was unveiled at the National Business Aviation Association convention and exhibition in October 2013, and is the French airframer’s first clean-sheet design since the long-range 7X was unveiled in 2001.

With a fuselage diameter of 2.7m (8.9ft) and a cabin height of 1.98m, the 16-passenger 5X is the largest aircraft in Dassault’s six-strong high-end business jet family, and boasts the widest cabin cross section of any traditional business jet.

The aircraft is pitched against the Gulfstream G450, G500, G600 and Bombardier Global 5000 and is powered by two 11,450lb-thrust (51kN) Snecma Silvercrest engines, marking the first time a Falcon has been launched with an all-new powerplant, or one produced by a French manufacturer.

Other new features include the latest iteration of Dassault’s EASy flightdeck, an ultra-efficient wing, an advanced digital flight control system derived from the Rafale fighter and a unique window in the ceiling of the cabin which gives a direct view of the sky above.

Speaking at the event, Dassault Aviation chairman and chief executive Eric Trappier said: “The 5X was designed to answer operator demand for an aircraft in the 5,000nm range that could provide more space and comfort than existing large-body jets, while combining the handling qualities, the low speed performance and operating economics which are the hallmark of Falcons.”

Trappier adds that the programme has been welcomed enthusiastically by its customers, but will not specify order numbers. He says: “We expect it to become every bit as popular as the 7X – the fastest selling Falcon we’ve ever built.”

Certification and service entry is earmarked for 2017.

The $45 million 5X is being developed in parallel with the airframer’s flagship type, the ultra-long-range 8X. The 6,450nm-range trijet - a longer legged and stretched version of the 7X - is scheduled for certification and service entry next year.