Delta Air Lines has signed a letter of intent to consolidate its operations to terminals two and three at Los Angeles International airport, a move that could leapfrog its facilities ahead of those of other carriers at the airport.

“We have a very big effort underway in Los Angeles,” says Richard Anderson, chairman and chief executive of the Atlanta-based carrier, in a recorded message to employees on 7 January. “We’ve signed a letter of intent with the city of Los Angeles to rehabilitate LAX [terminals] two and three and relocate our operation in what will be the biggest terminal facility there.”

Exactly what the rehabilitation of the terminals involves is not immediately clear. Delta confirms signing the LOI but declines to provide further details except to say that the agreement is still subject to approval by the board of Los Angeles World Airports (LAWA), which operates the airport.

“I’m not surprised that Delta would like to expand,” says Henry Harteveldt, founder and a travel industry analyst at the Atmosphere Research Group. “From the airline operational standpoint, the best thing to do is to knock the terminals down and build a new terminal that meet’s the airlines needs.”

“Neither terminal [two or three] is truly a 21st century facility on either the airside or the landside,” he adds.

Roger Johnson, deputy executive director of airports development at LAWA, told Flightglobal in January 2014 that the operator planned to demolish and rebuild terminal three, which he described as being in the poorest condition of all of the terminals at the airport, once the new midfield concourse is complete.

"The midfield [concourse] is pretty integral in addressing our constraints," he says. "[It] gives us flexibility."

The construction contract on the midfield concourse was awarded in December 2014, however, a visit to LAX in November showed only demolition and land clearing activity underway on the site west of the Tom Bradley terminal.

LAWA's long-term plans for terminal three are fluid. A master plan published in March 2014 shows a single linear terminal replacing terminals one through three on the north side of LAX’s horseshoe-shaped terminal. 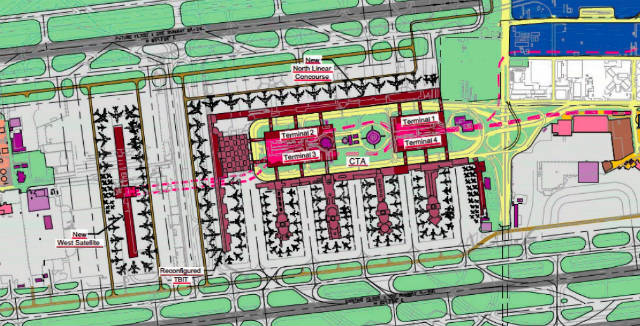 However, the linear terminal that is depicted with 13 mainline aircraft gates would not be able to support all of Delta’s existing operations at the airport.

Delta is gate constrained at LAX with only 14 gates in terminal five – the centre of its operations at the airport since it acquired Western Airlines in 1987 – and secondary access to some gates in terminal six.

“Delta would like to have much more of a presence in the [Los Angeles] market than they are able to have now in order to better compete with American, United and, to a lesser degree, Southwest," says Harteveldt.

"We're fast on our way to becoming the airline of choice in Los Angeles," said Ed Bastian, president of Delta, at the completion of $229 million in upgrades to its facilities in terminal five in June 2015.

He was referring to both the facility improvements as well as the air service and product improvements that the airline has made at LAX in recent years.

Delta has grown faster than any of its main competitors at the airport since 2014. Its seat capacity is up by more than a third to 620,000 this January from the same month two years ago, Innovata FlightMaps Analytics data shows.

Delta will continue to expand at LAX with five daily flights to Denver from 1 June and plans to shift all of its San Francisco shuttle flights to Boeing 717-200 aircraft this year.

While the renovations to terminal five and expanded service is good, Harteveldt says Delta has only set itself apart from American and United at LAX for the time being.

“As good as this is, they need something that’s better,” he says.