GE Aviation's GE9X turbofan returned to the skies on 10 December, kicking off a second round of airborne testing during which the engine maker will evaluate the powerplant's software and performance in hot-and-high conditions.

The latest round of testing will involve roughly 18 flights on GE's flying Boeing 747-400 testbed, which will carry the massive GE9X turbofan under its wing, GE says.

GE9X flight tests will stretch into the first quarter of next year, bringing GE closer to achieving its goal of receiving in 2019 certification of the engine by the Federal Aviation Administration, according to the Ohio-based engine maker. 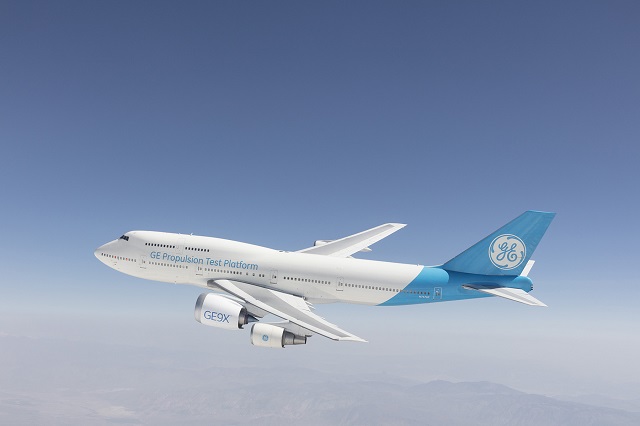 GE's GE9X turbofan goes to work on the wing of the company's 747-400 flying testbed.

The company's first round of GE9X airborne testing was delayed more than two months earlier this year after engineers discovered unexpected wear on "lever arms" that alter the pitch of vanes inside the engine's compressor.

The engine finally got airborne in March when GE began an initial round of airborne tests that lasted until early May. That round involved 18 flights and 105h of flight time, allowing GE to study high-altitude performance and to compare performance during cruise to ground-test data, GE has told FlightGlobal.

With the initial round complete, the company transported the test engine to Ohio, where it was modified into the final configuration expected for production, GE says.

"The engine is more than halfway through the certification testing programme and [has] completed various tests during the last few months," GE says.

Those tests have included evaluation of performance during water ingestion, overheating and crosswinds, it says.

"Tests that remain include blade out, hailstone, bird ingestion and block or endurance testing," GE says.

GE also plans to develop versions of the turbofan with 102,000lb-thrust and 93,000lb-thrust, according to regulatory filings with the FAA. Those engines could power other 777X variants.

GE operates a flight test center in Victorville, California, but also performs airborne testing from Colorado Springs in Colorado, Seattle, Fairbanks in Alaska and Yuma in Arizona, it says.

The company acquired its 747-400 flying testbed from Japan Air Lines, then modified and strengthened the aircraft's wing and strut to accommodate test engines, it says.