That’s according to officials from Russian defence holding company Rostec and the country’s export agency Rosoboronexport, who spoke during the MAKS air show near Moscow on 28 August.

CAATSA was enacted in retaliation for Russia’s invasion and occupation of Ukraine’s eastern regions and Crimean Peninsula.

The issue slowed India’s first payments on the Almaz-Antey S-400 Triumph anti-aircraft system, as no Indian banks want to facilitate the transaction and be subject to US sanctions. 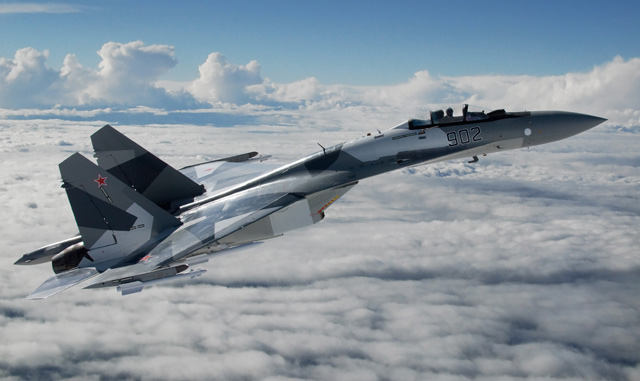 Jakarta apparently concerned about US sanctions in relation to Su-35 deal.

“There were initial difficulties due to banking restrictions,” says Kladov. “But then we talked on a [government-to-government] level and we used different currencies. In the case of India we rely on rupees. The system is adapted to new reality.”

India is expected to imminently pay 20% of the $5.2 billion cost of the S-400 Triumph, with Russia planning to deliver the first shipment of parts for the weapons system upon receipt, Russian Trade Commissioner Yaroslav Tarasyuk reportedly told an Indian newspaper on 28 August. That report says Russian bank Sberbank will facilitate the exchange.

While Rostec’s Kladov downplays the need to circumvent US sanctions in the case of India, he acknowledges some countries have grown cautious of arms sales from Russia. For instance, Indonesia’s interest in buying Sukhoi Su-35 fighters appears to be dampened by worries of blowback from the USA.

“We feel like some nations are more cautious,” says Kladov. “For instance, yesterday I talked to the Indonesian chief of the air force and he mentioned CAATSA, the US law. From what he says, I understand they receive threats. They are dependent not just on Russian equipment, they are dependent on a large part of US-made equipment. If as a punishment measure, let’s say, American manufacturers stop supplying spares, stop supporting American-made equipment, then there will be a breach in security in national defence in Indonesia. So, they are very cautious.”

In August 2017, Jakarta confirmed it would buy 11 Su-35s for $1.14 billion, with a major component of the deal involving agricultural commodities.

Dmitry Shugaev, director general of the federal service of military-technical cooperation with Rosoboronexport, says in a separate press conference that USA sanctions amount to “unfair competition”.

“They want to push Russia away from traditional markets, and create unbearable conditions, and not to give us a way into new markets,” he says. “The pressure is going up every day [on potential customers]. We see it every day and it is not a secret, not a secret for anyone.”