Tyndall Air Force Base in Florida, home to a Lockheed Martin F-22 training wing and a number of Boeing QF-16 target drones, suffered major damage when Hurricane Michael slammed into the military installation as a Category 4 storm with winds in excess of 130kt (241km/h).

There are no reported injuries or fatalities involving base personnel, who were evacuated before the storm made landfall. However, the entire base, including the flight line and several hangars containing aircraft, showed major damage, according to an aerial survey conducted by Tyndall AFB’s leadership.

The base remains closed as trees and power lines block nearly every road, says Tyndall. As of the evening of 11 October, power and basic utilities were out. Initial assessments by the USAF concluded the base will require extensive cleanup and repairs.

“You can see the debris on the runway, the taxi areas. So it’s pretty clear that several buildings have been pretty heavily damaged and there is debris spread across the airfield,” said Jesse Kallman, chief executive of Airbus Aerial, after examining satellite imagery. “It’s pretty safe to say, there is going to be some work to be done before they can clear all those things out and make these runways operative again.” 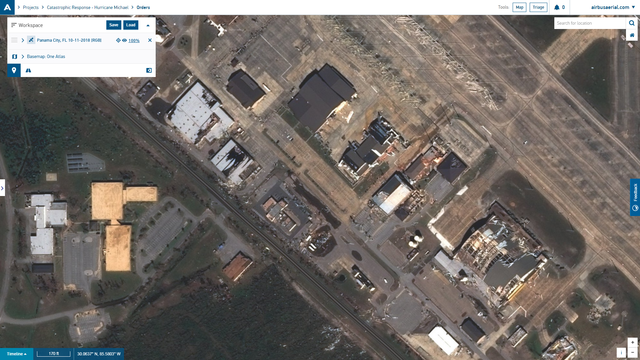 Tyndall AFB is home to the 325th Fighter Wing, whose primary mission is to train F-22 Raptor pilots and maintenance personnel. It also hosts a number of QF-16 target drones. On 8 October, several days ahead of the storm, the base ordered aircraft evacuated to Wright-Patterson AFB, Ohio and Fort Worth Alliance Airport, Texas.

However, images and video posted to social media show several F-22s, QF-16s and twin-engine props remained behind. The aircraft can be seen inside hangars rendered roofless by the storm. The extent of the aircraft damage, and why they were not evacuated, remains unclear. 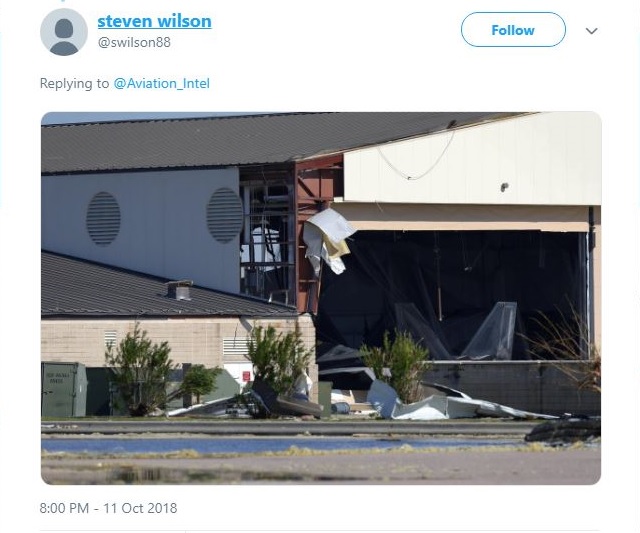 Separately, an F-15 fighter on static display on the base was ripped off its foundation, thrown on its back.

The damage comes the same week another F-22 crash landed and skidded across the runway at Elmendorf Air Force Base in Anchorage, Alaska. It also comes amid a USAF push to improve the type’s readiness for combat.

The service has only 186 operational F-22s and has struggled to deploy and maintain the aircraft effectively, according to a Government Accountability Office report released 10 October.

“Availability was constrained by maintenance challenges and unit organisation,” says the report. “For example, maintaining the stealth coating on the outside of the F-22 aircraft was time consuming and significantly reduced the aircraft’s availability for missions.”

The F-22 is the USAF’s most expensive fighter aircraft with a cost of $412 million per unit, according to the GAO. What’s more, damage to the aircraft is notoriously expensive to repair. For example, when a trainee accidentally retracted the landing gear during an attempted touch-and-go manoeuvre and skid the aircraft across a runway in 2012, it took $35 million and six years to repair damage to the aircraft’s radar-absorbent skins and internal structure.