A long-term UK effort to enhance in-flight data connectivity among multiple Royal Air Force (RAF) combat aircraft is to enter a new phase, with a series of demonstrations to be carried out later this year. 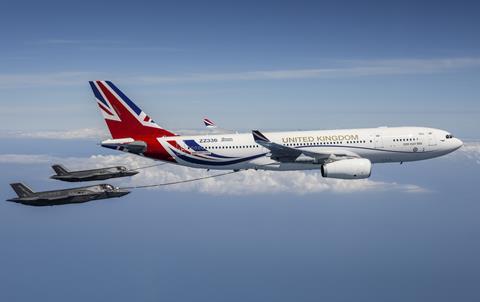 During the forthcoming trials programme, a suite of networking technology will be employed by an Airbus Defence & Space A330 tanker/transport, bolstering connectivity between multiple platforms. The equipment includes a defence of the homeland app named Deckard, a Nexus data platform and the Raven micro server, all supporting a combat cloud architecture.

The RCO last year formed an Air Information Experimentation unit, and Taylor says: “Since then, our information advantage journey has accelerated.

“This year we will build our classified environment, and in the next few months we will launch Babel Fish VII, looking to put Deckard, Nexus and Raven onto a Voyager tanker, experimenting with multi-domain integration, to understand which areas we wish to develop to full capability,” Taylor says.

The activity will build on the results of connectivity trials performed through the Babel Fish programme’s third to fifth phases, which involved the Eurofighter Typhoon and Lockheed Martin F-35B Lighting. This work focused on “sharing data, allowing F-35 to operate ‘silently’, at the tip of the spear”, he notes.

Taylor also details the planned culmination of the multi-year activity, noting: “Our immediate aim point is Babel Fish X, where we plan to demonstrate true multi-domain integration. Our intent is to complete that within two years.”

Meanwhile, RAF chief of the air staff Air Chief Marshal Mike Wigston during the same conference revealed another forthcoming activity planned for one of the service’s trials units.

“We will expand 216X Squadron’s operational trials to evaluate the operation of swarming drones from our Queen Elizabeth-class [aircraft] carriers,” he says. The same unit will also explore the potential of operations using so-called “autonomous wingman” platforms, he says.