Avianca will only operate Boeing 787-8s in simplified widebody fleet

Colombian flag carrier Avianca says its future widebody fleet will feature only Boeing 787-8s, as it seeks to emerge from US Chapter 11 bankruptcy protection with a simplified roster of aircraft.

Describing the Boeing type as the airline’s “long-term solution” for long-haul flights within the Americas and to Europe, Avianca cites factors such as the 787-8’s “cargo payload, higher fuel efficiency and greater seating capacity” when explaining the decision announced on 21 October.

“One of Avianca’s strategic objectives is simplifying its fleet while increasing efficiency; selecting the 787-8 as the airline’s single aircraft type for long-haul flights is an important step towards this goal,” says chief financial officer Rohit Philip. 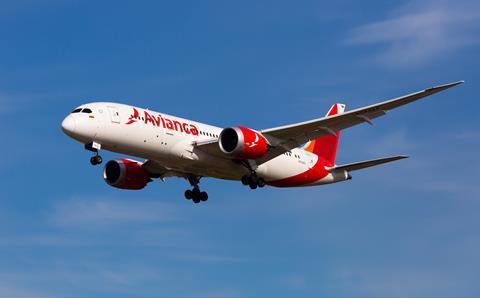 Avianca currently has six of its 787-8s in service

The decision spells the end in Avianca colours for seven Airbus A330-200 aircraft; Cirium fleets data shows three of those twinjets are currently in service, with four in storage.

The carrier also has a single 787-9 in storage, with two more on order, Cirium data suggests.

Avianca does not give a timeline for those aircraft exiting its fleet, nor does it clarify the status of its 787-9 orders, although it does reference “open and constructive dialogues with Boeing, Rolls-Royce, lessors and financial institutions” as underpinning its decision.

Philip notes that Avianca plans “to retain our lie-flat business-class seats, targeting our loyal business customers, while redesigning the rest of the cabin with latest-generation seats over the next 18 months”.

Alongside the carrier’s simplified widebody fleet, its existing and on-order Airbus narrowbodies will help to drive that strategy.

The carrier hopes to exit bankruptcy protection under a reorganisation plan that is being considered by a US court on 26 October.