Qantas is to reactivate its five remaining Airbus A380s by December 2023, as the airline looks to ramp up international capacity, including resuming flights to New York.

The carrier, which widened its underlying loss in the year to 30 June, says the five superjumbos – retrofitted with updated cabin products – will return to flying once maintenance works are completed.

The move means by end-2023, the airline will have a full fleet of 10 A380s flying, making it one of the few carriers in the region to continue operating the type. 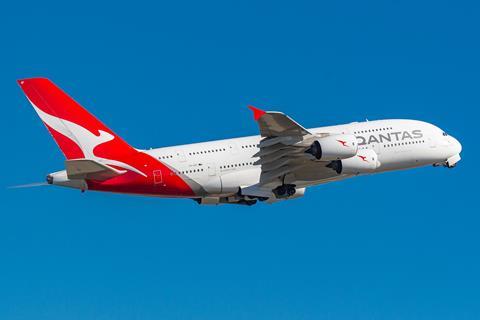 A Qantas Airbus A380 taking off from Sydney Airport.

Qantas, like other operators in the region, grounded the A380 amid the coronavirus pandemic, as travel demand collapsed amid border restrictions. Some carriers, like Malaysia Airlines and Thai Airways, have permanently retired the type, while others, like Singapore Airlines, have reinstated them.

In a fleet update alongside its full-year results, Qantas says it will be taking delivery of its final three Boeing 787-9s during the current financial year, which ends 30 June 2023, while low-cost unit Jetstar will take nine A321LRs during the period.

In a separate statement, Qantas says it will resume flying to New York from June 2023, operating via Auckland, as it gears up for eventual direct flights under its ‘Project Sunrise’ ultra-long-haul programme.

The thrice-weekly flights will be operated by 787-9s, aided by the delivery of three remaining 787s it has on order. It marks Qantas’ return to New York, after a three-year pandemic hiatus.

Prior to suspending flights amid a global shutdown of travel, Qantas operated one-stop flights to New York via Los Angeles.

The new flights will put the airline in direct competition with trans-Tasman rival Air New Zealand, which is will launch non-stop flights from Auckland to New York in September.

Under its ‘Project Sunrise’ programme, Qantas will fly direct between Sydney and New York and London, with flights operated by A350-1000s. The ultra-long-haul flights will commence in 2025.