Airbus Helicopters has delivered the first two examples of its new EC175 rotorcraft to Belgian operator Noordzee Helikopters Vlaanderen (NHV), as it looks to put an end to a two-year programme delay.

Handed over on 11 December at a ceremony at the airframer's Marignane headquarters in France, the pair (MSN2 and MSN4) will be utilised for oil and gas offshore transportation.

“Today is a very special day for all of us,” says Guillaume Faury, Airbus Helicopters chief executive. “The delivery of these first EC175s is indeed a key milestone for NHV, for our customer community and for our company.” 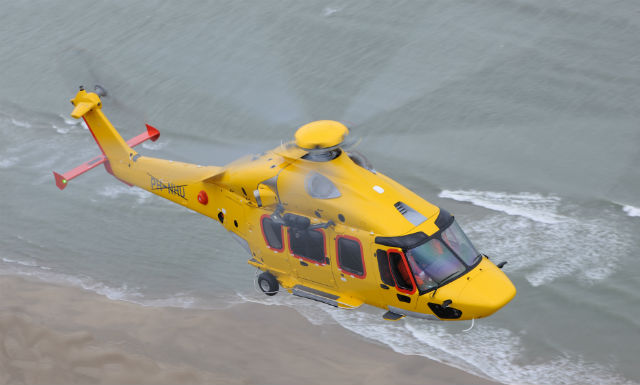 NHV chief executive Eric Van Hal says he is “proud” to be the first operator of the 7.5t type. The Ostend-headquartered operator has 16 EC175s on order. The company will put its new helicopters into service during the week starting 15 December, with commercial flights to commence from Den Helder.

Van Hal says the EC175s will help the company to accelerate its growth. It plans to open a base in Aberdeen in 2015 using the EC175, as it is ideally suited “to about 80%” of missions from the Scottish site. “We are in touch with a lot of customers and they are seeking a flexible operator that can quickly position an aircraft that are cheaper than the EC225 and [Sikorsky] S-92,” he says.

So far, four production-standard helicopters have been built – three customer aircraft and a flight-test model – with another 18 on the assembly line.

Most of these are being produced as the offshore variant, although one will be used for VIP transportation. 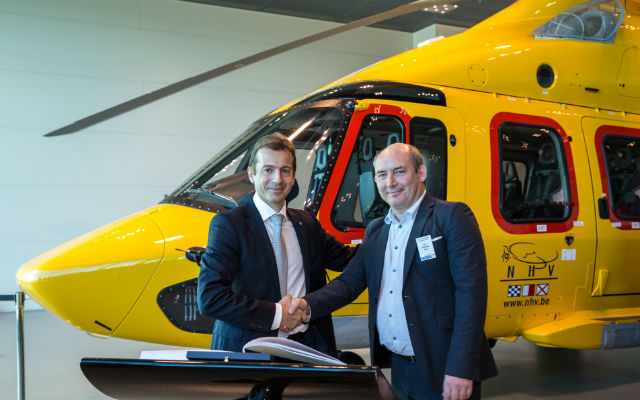 The next recipient is likely to be Russian operator UTair, with negotiations continuing on whether to deliver aircraft MSN3 before the end of 2014. None of its pilots have received training by Airbus Helicopters yet, however, although a number of its technicians have been type-rated on the Pratt & Whitney Canada PT6-powered super-medium twin.

The third of the three launch customers is Héli-Union, but its initial delivery will not occur until during 2015. The French operator will receive MSN5, which has yet to roll off the line.

Presently each helicopter takes around 12 months to complete, but the target is to eventually cut this to five as Airbus ramps up to a rate of 30 per year within three years. This will be achieved by shifting from a static assembly line to a faster flow line, the airframer says.

The backlog for the EC175 is a claimed 64 units. That figure has barely increased over the past 24 months, with five added in 2013 and eight so far this year.

Around two-thirds of the current commitments are firm orders. Faury says that although orders have been slow to come, Airbus Helicopters anticipates more deals shortly, and potentially by year-end. “First delivery and entry into service are important milestones for customers,” he notes.

The EC175 is currently being outsold by the heavier 8.3t AgustaWestland AW189. In a sign of the fierce competition in the new segment, the Anglo-Italian firm announced the day before the EC175's handover that its super-medium had entered service with a third operator – Gulf Helicopters – and that the orderbook for the type had grown further with the sale of two aircraft to Vietnam Helicopter Corporation.

Prior to the new order, Flightglobal's Ascend Fleets database recorded a backlog of 79 helicopters for the AW189, with a further 54 covered by letters of intent or options.