Boeing is targeting an October test of new CH-47F Chinook rotorblades to increase its maximum take-off weight by 907kg (2,000lb), despite the upgrade not yet being fully funded by the US Department of Defense.

A US Army-owned Chinook is at the manufacturer’s Mesa, Arizona facility where it is undergoing modifications ahead of tests of the honeycomb composite rotorblades, which form part of the service’s Block II upgrade plan.

Full evaluations will begin in October, following preliminary trials the previous month. Once fielded, the upgrade will increase the heavy-lift helicopter’s useful load to 13,600kg, up from 12,700kg at present.

Although the enhancements are yet to be approved by the US Department of Defense, there is an acknowledgment that “we need to work through Block II to keep the aircraft viable”, says Mark Ballew, director of attack helicopter sales at Boeing. A milestone B decision on the upgrade package is expected in the first half of fiscal year 2017.

Boeing is pursuing a Chinook sale to Germany as a replacement for the Luftwaffe’s fleet of Sikorsky CH-53Gs. It may offer Berlin the extended-range model – currently performing “remarkably well” with the Royal Canadian Air Force – which has twice the fuel capacity of baseline F-model.

The airframer considers the Chinook to be the “sweet spot” for Germany in terms of lift capabilities, says Ballew. 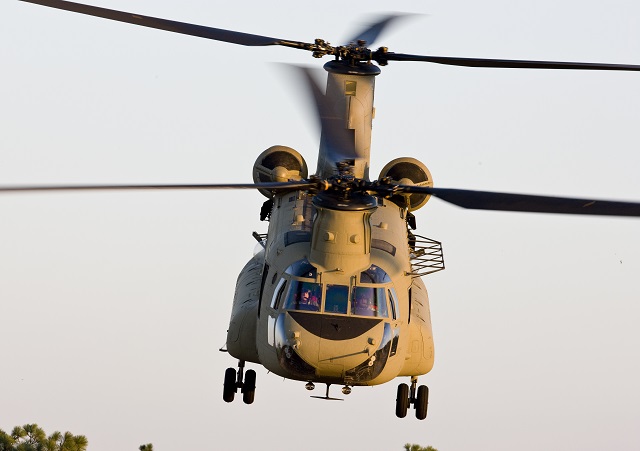 Modifications, such as those to the rotorblades, along with performance increases, are part of Boeing’s plans to provide “more value for less” to customers, by offering clear upgrade paths for its helicopter programmes.

Although declining global defence budgets are putting pressure on sales, Boeing is confident it can increase its market share. And while some orders have been slowed, it has yet to see any cancellations.