The Hindustan Aeronautics (HAL) Dhruv MkIII MR 2.5t helicopter has undergone a series of trials aboard an Indian Coast Guard ship at sea.

The work involved flight operations to the ship in addition to deck handing activities, says HAL. 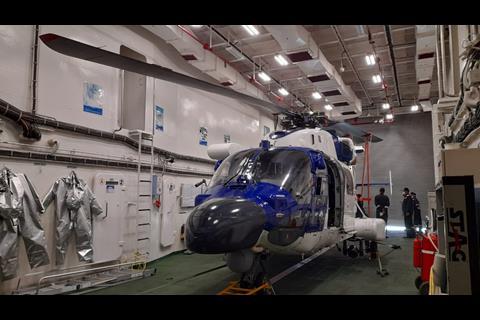 The Dhruv MkIII inside the hangar 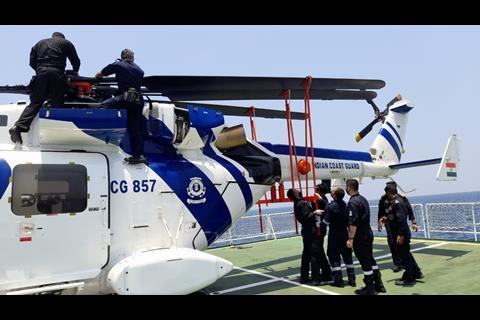 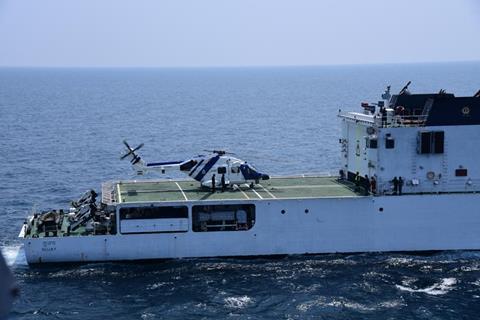 The Dhruv MkIII on the flight deck

The rotorcraft’s blades were folded for storage in the ship’s hangar, where maintenance was performed while the vessel was underway. In addition, the rotorcraft underwent hot refuelling with its engines running.

“These trials have proven the capability of ALH Dhruv to carry out extended operations from ships,” says HAL chairman R Madhavan.

“Some of the missions that were successfully executed were surveillance, search and rescue, and anti-pollution to address oil spillage. With the successful demonstration of these capabilities like blade folding, stowage, the helicopter is now ready to be fielded for operations.”

The work took place aboard the ICGS Sujay, an offshore patrol vessel launched in 2016.

Cirium fleets data indicates that there are 338 Dhruvs in service. Major operators include the Indian army, with 191 examples, and the Indian air force, with 107. HAL has orders for 117 additional examples.

The Indian Coast Guard is listed as having eight Dhruvs in service, with an additional 14 on order.