India’s defence ministry has cleared the purchase of an additional 48 Mil Mi-17 V5 medium-lift rotorcraft from Russian Helicopters, for use by the nation’s air force.

Worth an estimated $1.1 billion, the procurement decision was taken during a Defence Acquisition Council (DAC) meeting that also deferred an announcement about an Indian navy requirement for more than 100 naval utility helicopters. An approval was given, however, for the purchase of eight Hindustan Aeronautics (HAL)-built Chetak utility helicopters.

The DAC approval will lead to the case for the Mi-17 procurement proceeding to the Cabinet Committee on Security, before a formal contract can be signed. New Delhi has previously placed orders for a combined 151 Mi-17 V5s, through contracts signed in 2008 and 2012 for 80 and 71 examples, respectively.

All rotorcraft from the first order were delivered by May 2013, and the final three from the latter will arrive in India before the end of this year. 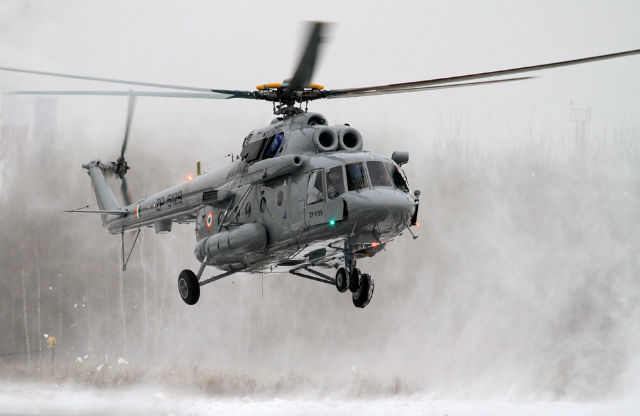 Russian Helicopters has already offered an upgrade package for the Indian air force’s older Mi-17s, which would bring them closer to the V5 standard. The aircraft would be equipped with new engines and auxiliary power units, and receive upgraded gearboxes and new navigation, communication and avionics systems. An improved self-protection capability is also proposed.

The latest order for the Chetak – an evolution of the European Alouette III design – will take total orders for the HAL-assembled type to approximately 360 units since licensed production began in Bengaluru in 1970. The decision to place new orders is a surprise move, given the availability of the company’s Dhruv advanced light helicopter.