Minister for defence materiel Jason Clare has mentioned the MRH90 in association with the list in statements earlier this year, but this is the first time the programme has officially been added.

Australia is obtaining 46 MRH90s under its AIR 9000 phase two, four and six programmes to replace the army's Sikorsky UH-60 Black Hawks and the navy's Westland Sea Kings. It has taken delivery of just 13 aircraft, which are produced by Eurocopter's local arm Australian Aerospace. 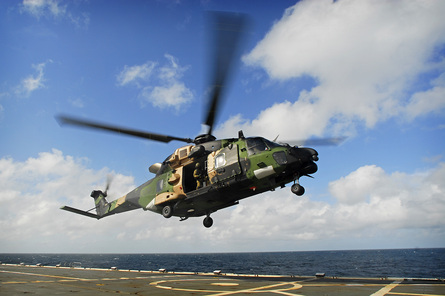 "The project is running late, primarily due to technical issues affecting the aircraft," said Clare. "The project has suffered delays of some two years to date. There remains a risk that the programme will be further delayed."

The programme underwent separate reviews in April and September. After the April review, prime contractor Australian Aerospace agreed to a remediation strategy.

After the September review, however, Clare said the project was still suffering from "significant" technical issues. "These have now triggered earlier indicators and warning thresholds for schedule and contractor performance," he said.

The programme's troubles could result in a capability gap for the navy and army. The navy will moderate this with "an additional short-term S-70B-2 Seahawk flight" and the army will extend its use of UH-60s.

The Wedgetail and KC-30 could be removed from the list soon as the systems have met or are close to meeting Australian requirements.