Andres Conesa’s foray into the aviation industry was supposed to last only a year. Tasked by the Mexican government in 2004 to oversee the sale of state-owned Aeromexico and Mexicana, the then-civil servant had intended to leave after his job was done.

But in 2005 he was named to lead Aeromexico. Fast-forward 12 years and he is still at the helm, although that is where the similarities end regarding the state of Mexico’s airline industry. The country’s oldest carrier and arch-rival Mexicana was declared bankrupt in 2014, and Aeromexico has had to contend with competition from younger low-cost carriers that have grown rapidly in its back yard over the past decade.

For Conesa, standing still at Mexico’s flag carrier has not been an option.

“When you have competition, you are obligated to re-invent yourself,” he tells FlightGlobal at Aeromexico’s corporate headquarters, located on Paseo de la Reforma, a busy avenue in the heart of Mexico City. “Today the industry is much more competitive than it was five years ago.” 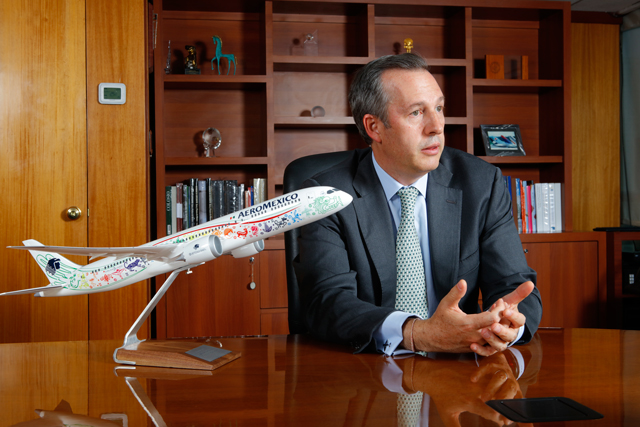 To set itself apart, the airline has focused on marketing itself as a global carrier for business travellers amid a landscape of growing low-cost carriers playing to the leisure customer. It has placed international growth front and centre of its network strategy, and now has about two-thirds of its capacity devoted to overseas flying.

Recently, a key pillar of Aeromexico’s international expansion has begun to move into place, with the imminent launch of a joint venture between the airline and its US partner, Delta Air Lines. In March, Delta closed on a $620 million investment in Aeromexico and now owns about 36% of the airline, with the option of raising this to 49%.

The joint venture with Delta will be the first such deal involving a Latin American carrier, even as joint ventures have taken off in other parts of the world involving US, European and Asian airlines.

The Delta-Aeromexico tie-up will also be the first joint venture on routes that are operated with mostly narrowbody aircraft, Conesa points out. “We are launching a JV in a market that moves the most passengers between two network frontiers,” he says. “Between Mexico and the US, total traffic was about 35 million passengers last year.”

Unlike previous airline joint ventures that received relatively easy passage through the US regulatory process, the proposed Delta-Aeromexico partnership faced an onslaught of opposition from several rival carriers.

These airlines took issue with Aeromexico’s dominance at Mexico City International airport, where it holds a 45% share of flights. Frustrated with slot constraints at the already congested airport, the carriers said a Delta-Aeromexico joint venture would only fortify Aeromexico’s position, shutting out smaller competitors.

To allay these concerns, US transport regulators eventually called on Delta and Aeromexico to divest 24 Mexico City slot pairs and another four at New York John F Kennedy. Among other conditions, the US Department of Transportation also limited its anti-trust immunity approval for the partnership to only five years.

Despite yielding to these conditions, Conesa emphasises the benefits that the joint venture is expected to bring to the US-Mexico transborder network.

The two airlines aim to improve flight schedules and connecting times so that 90% of their passengers will not have to make more than one connection, he adds.

“The idea is that even though we connect Mexico City to Los Angeles or New York today, we can improve not only in terms of the number of frequencies but to also have the right flight times in terms of departures and arrivals, to have better connections in the hubs.”

“We are not only joining efforts in network, but also providing co-location in airports,” he says. “It will be a seamless experience. The idea is whether you fly Delta or Aeromexico, you basically experience the same product.”

Besides being network-accretive, Conesa believes the Delta partnership will benefit employees and shareholders. He points to Delta’s shareholding in Aeromexico as a crucial element for the joint venture to be successful.

“When you have a JV between two companies and there is no cross-holding of shares, it’s more challenging doing any kind of settlement and distribution of the proceeds,” he says. “When you have an airline owning [a share] of another airline, it aligns things very, very well.”

When talk of a joint venture between Delta and Aeromexico first surfaced in 2014, the US presidential elections were about two years away.

US transport regulators formally approved anti-trust immunity for the two airlines in the waning days of the Obama administration in December 2016, a month before Donald Trump took office.

The election of Trump – who has called for a wall to be built on the US-Mexico border – has shaken diplomatic ties between the two countries. Relations have since been frosty, after a scheduled meeting between the newly elected Trump and Mexican president Enrique Peña Nieto was cancelled in January.

Conesa does not comment directly on Trump’s rhetoric against Mexico, but defends the North American Free Trade Agreement (NAFTA) – a pact that Trump has threatened to tear up.

“The two economies are significantly linked,” says Conesa, who holds a PhD in economics from the Massachusetts Institute of Technology.

“Yes, Mexico has a surplus, but if you look at the trade deficit between the US and Mexico, it probably explains less than 10% of the total deficit of the US. So really, Mexico is not the issue.”

Conesa believes that NAFTA will remain, and appears optimistic about links between the two countries’ economies. He was quick to highlight the partnership with Delta as a signpost of how connections between the US and Mexico will continue to grow.

“There obviously is noise right now but for the benefit of both countries, NAFTA will be operated, trade and integration between the two economies will continue,” says Conesa. “One example of that is what we are doing with Delta. We are connecting people in the two countries better, because we think that the market is not only very significant but that it will grow going forward.”

The depreciation of the peso against the dollar, however, has not gone unnoticed by Aeromexico or Volaris. Both airlines have revised growth plans for 2017, citing new uncertainty they have observed since the US elections.

Aeromexico has trimmed its planned seat growth in 2017 to 4% from 7%. Most of the capacity increases will be in Aeromexico’s long-haul widebody operations.

Within Mexico, the airline has decided to ground half of its 12 Embraer ERJ-145s, which it owns and operates mostly on domestic routes through regional affiliate Aeromexico Connect. Conesa says: “[Domestic capacity] has been too high considering the growth in the economy. We think it’s very difficult to sustain growth in double-digit capacity in ASKs with the economy growing at 2%.”

While Aeromexico might be more modest on growth at home, it is bullish on expanding overseas as it cements its status as Mexico’s global carrier. Conesa is proud of the fact that the airline is the only Latin American carrier that serves Asia, along with North and South America and Europe.

More international growth is in the pipeline for 2017, with new flights to Detroit, Seoul, Calgary and San Jose, California. Seoul is Aeromexico’s latest long-haul addition after it began Amsterdam service in 2016, and will be the airline’s third Asian destination after Tokyo and Shanghai.

“We think the market is there to link Seoul and Mexico City,” says Conesa, pointing to the investment by South Korean companies in Mexico.

Besides adding more dots on the world map, the airline is adding frequencies on existing long-haul routes. It will boost London, Amsterdam and Tokyo to daily service this year, and plans to add frequencies to Shanghai, Madrid and Buenos Aires.

The partnership with Delta will pave the way for more Aeromexico expansion to its northern neighbour, whether through new US destinations or additional frequencies to existing points.

To start with, Conesa indicates that the two airlines plan more service to connect each other’s hubs. “Our main hub is Mexico City; we also have Guadalajara and Monterrey,” he says. “Delta has seven hubs: Los Angeles, Seattle, Salt Lake City, Minneapolis, Detroit, Atlanta, New York. The idea is to connect these dots better.”

There is also the opportunity to launch service from secondary cities in Mexico to Delta hubs, such as between Queretaro and Atlanta, says Conesa.

Aeromexico’s global expansion is in line with an effort to differentiate itself from its Mexican rivals Volaris, Interjet and VivaAerobus – younger airlines that have grown significantly in the past decade.

The three airlines offer a single class of service on narrowbodies and operate networks that are heavy on domestic and US routes, while Aeromexico offers a business-class cabin and a network that spans more than 80 cities on four continents.

“Our business model is differentiated. We are Mexico’s truly global airline,” Conesa says. “We fly to many places in the Americas but we also fly to Asia, to Europe… we have widebodies, we have a regional carrier, we have a mainline network with our Boeing narrowbody fleet, and that is a different business model from the LCCs.”

Having a global network also gives Aeromexico a natural hedge against volatility in currencies, as evidenced by the pains Mexican airlines have faced with the depreciation of the peso.

“Our network is a big risk mitigator by the fact that we can generate non-peso revenue,” he says.

While Aeromexico seeks to set itself apart from Mexico’s low-cost carriers, Conesa believes the airline’s competitors are here to stay, although he predicts that consolidation will take place at some point.

“With the growth that has taken place, even with the size of the Mexican economy… there are four main carriers [today] so probably going forward you could argue that further consolidation… will be needed,” he says.

Asked if he sees Aeromexico playing a role in future industry consolidation, he says: “That depends on how the anti-trust authorities view the industry going forward.”

Conesa argues that unlike other parts of the world such as Europe and the US where airlines have consolidated, Mexico still believes in “the more the merrier”. But history shows that not all airlines succeed. Besides Mexicana, a number of smaller carriers have ceased operations in the past decade.

“In Mexico, the airline industry has been viewed with the recipe – the more airlines you have, the better. In my view that’s not the case,” he says. “You need business models that are sustainable to avoid having these periods that have happened here; growth, then airlines going out of business. That’s what you do not want.”

Alongside the evergreen airline challenges of economic volatility, currency fluctuations, fuel prices and infrastructure problems, Conesa says the airline is focused on increasing its appeal to younger Mexicans, who might not fall into the typical corporate traveller segment that Aeromexico usually targets.

“If you look at Mexico, it is a very young country. The average age of the population is probably 30, 31 years old and there is a highly educated growing middle class,” he says. “We need to strengthen our value proposition to our current loyal clients, but also offer a product that the new generation wants.”

To that end, the airline has stepped up efforts to increase its appeal to today’s technology savvy young traveller, including rolling out a new marketing campaign and a revamped website.

“We are heavily investing in a new digital eco-system, with the new website, new kiosks, new apps, and we are putting a lot of effort in social media,” he says.

“We want to be the preferred carrier for the people today who are between 20 to 35 years old. Today they don’t fly us much, but they would be the big clients of the future.”

The airline’s drive to capture tomorrow’s clientele is yet another facet of how it is seeking to adapt and evolve, even as it faces growing competition from the Mexican LCCs that were just starting out when Conesa took over the reins at Aeromexico 12 years ago.

The lessons behind Aeromexico’s resilience, following a decade that has seen the demise of many of its peers, are not lost on Conesa.