Cebu Pacific chief executive Lance Gokongwei is not one for long anecdotes or colourful quotes, but gets straight to the point, the epitome of a sharp businessman.

He eschews massive orders signed in the presence of presidents, and never ventures into unfamiliar territory merely to irritate competitors. Instead, the unassuming and soft-spoken businessman calls himself “a conservative guy”. His measured approach is exactly why the low-cost carrier has consistently been the Philippines’ top-performing airline.

Where peers saw falling profits and increasing yield pressure in 2016, Cebu Pacific had a record year. The airline has yet to release its financials, but Gokongwei says it was “the best year ever” in terms of revenue and profitability, with passenger numbers crossing 19 million for the first time.

The only time the 20-year-old carrier posted a loss was in 1998, its second year of operations. That was an especially bad year for the airline, with a McDonnell Douglas DC-9 aircraft crashing into Mount Sumagaya during a Manila-Cagayan domestic service, killing all 99 passengers and five crew. Cebu Pacific was also in the red in 2008, but was profitable before extraordinary items.

Cebu Pacific has done so well that it has overtaken Philippine Airlines (PAL) as the country’s dominant player, accounting for more than 50% of the domestic market. With low fares and a young fleet, it unlocked latent demand for air travel within an archipelago where ferries and buses have traditionally been the main modes of transport, making true its “every Juan can fly” slogan. 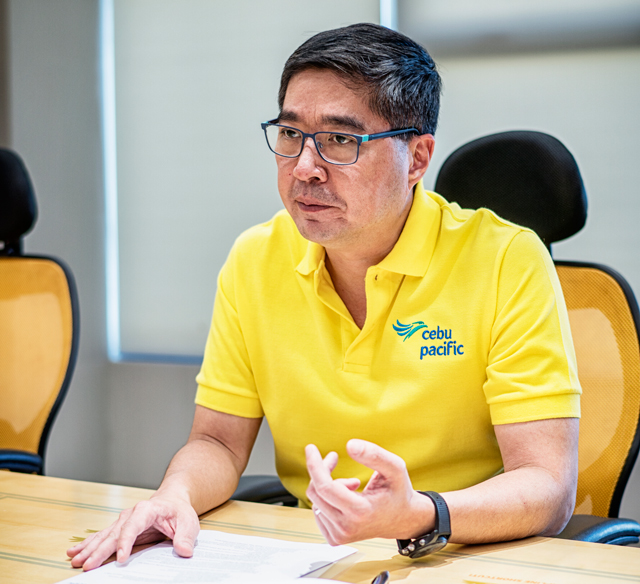 Gokongwei was first called to pilot the airline when he was barely 30. His father, prominent tycoon John Gokongwei, had bought Cebu Pacific in 1995, after a failed bid for a stake in PAL when it underwent privatisation.

Speaking with FlightGlobal at the airline’s headquarters overlooking Manila’s Ninoy Aquino International airport, the younger Gokongwei recalls the early days when Cebu Pacific operated four used DC-9s on domestic services out of Manila. It offered fares that were lower than PAL’s and did “extremely well” until oil prices started creeping up in 2003. By then, PAL had updated its fleet and could also compete on price.

“At that time we also saw models like Ryanair, EasyJet and AirAsia, working with brand new aircraft and using the internet as a distribution method,” says the 49-year-old Filipino Chinese. “We decided we had to reach a strategic inflection. Do we change the model to copy them? Or do we become a full-service carrier?

“We made a major step in 2004 to re-fleet and really go hardcore LCC. Since then we have been very successful, becoming the largest domestic carrier in 2006, and we’ve gone from strength to strength.”

Gokongwei was on the cover of Flight Airline Business in 2012. Since then, Cebu Pacific has expanded its fleet by a third to 58 aircraft, entered the much-debated long-haul low-cost segment, and launched a separate turboprop unit – Cebgo – which operates with its own air operator’s certificate.

The decision to go long-haul was not an easy one. Cebu Pacific studied the business case for a year before it took the plunge in 2013, leasing four Airbus A330-300s from US lessor CIT.

“The Philippines is a unique case because we have 10 million Filipinos working outside the country, and point-to-point works well when you have large concentrations of population on both sides. Given the over three million Filipinos in the Middle East and large concentration of Filipino emigrants in Australia, we thought a point-to-point proposition would work,” Gokongwei says.

He concedes that the long-haul journey has been “more challenging than anticipated” and “an education” for the carrier. Unlike the rest of Cebu Pacific’s business, the unit has yet to attain consistent profitability, being in the black only during certain months.

As it launched its A330s into the Middle East, the Gulf carriers added substantial capacity while PAL competed head-on, offering single-class A330s on the same routes. It also had to learn that unlike short-haul, the main distribution channel for long-haul, with workers’ tickets generally covered by their employment contracts, is through agents – not the internet.

“It was quite a bloodbath for the first couple of years and it’s still not easy now,” Gokongwei admits. Experience built up over the past few years, and lower fuel prices, have helped, and services to the Middle East are now “near profitability”. It has also had to make some quick decisions, including ceasing operations to Damman just five months after launch.

Alongside services to Riyadh, Kuwait, Doha and Dubai, its other long-haul route goes to Sydney. Gokongwei says the route has seen the “Cebu Pacific effect” with 70-80% growth in the market, the bulk of which has gone to the carrier.

“At the same time we didn’t see Qantas or PAL’s numbers decline, so we think we’re able to stimulate the market. That said, the costs into Sydney are quite high and the yields are fairly low.”

His strategy for long-haul remains to go where the Filipinos are – the Middle East, Australia and eventually the USA. While the airline has talked about going into Melbourne and Honolulu, Gokongwei says this will not be a priority for the next 12 months, as it works to build on and stabilise its existing long-haul network.

It also needs more widebody aircraft – it has six A330s, with another coming in May – to upgauge its domestic and regional services. The widebodies are key to dealing with severe slot constraints at Manila.

Gokongwei views infrastructure constraints as one of the airline’s largest challenges in the coming years. Manila has one of the region’s most congested gateways and handles only 40 aircraft movements an hour, making it near impossible to get additional slots. The only bright spot in this situation is that rivals with large aircraft orders have been unable to fly into the capital city despite ASEAN open skies.

For years, the government has dithered on a second airport, and has yet to even decide a location. Thus, local carriers expect no reprieve from Manila’s slot shortage for years to come. Air navigation service NATS has also been tasked with raising aircraft movements at the airport by optimising the configuration of its intersecting runways.

Cebu Pacific’s strategy is to optimise precious Manila slots by using larger aircraft where it makes sense. It has disposed of six Airbus A319s, with the last four to be sold by the end of the year, and its 230-seat A321neos will start arriving from the fourth quarter. When its final A330 on order arrives in May, it will operate longer domestic sectors as well as thicker regional ones such as Tokyo, Singapore and Hong Kong. Cebgo is also replacing its ATR 72-500s with 78-seater -600s, being the first carrier in the world to operate the high-density variant.

The airline ceded some market share to PAL in 2016, with a net fleet increase of just one aircraft as it awaits its A321neos. It expects to lose more ground throughout 2017, until the new-generation jet comes on board. This, the rational businessman says, is a sacrifice he is willing to make to put Cebu Pacific in a better position in the long term. Growth will, however, come quickly in 2018, when it will add 12 A321neos.

Besides just upgauging aircraft, Cebu Pacific will develop a five-hub strategy outside of Manila. The plan is to launch more international services out of Cebu, Clark, Davao, Iloilo and Caticlan, bypassing congested Manila and “connecting the dots”.

Asked about the next stage of growth, Gokongwei says that with the A321neos and ATR 72s on order, the carrier’s fleet will grow to close to 90 within the next five years, doubling its passenger throughput. The incoming aircraft, with more seats and better fuel efficiency, will also help lower costs.

It also wants to add new-generation widebodies for use into the USA, and will issue a request for proposals towards the end of 2017. Types to be considered include the Airbus A350 and the Boeing 787 and 777.

Gokongwei does not worry that services to the US West Coast will unduly stretch the low-cost carrier, or prove too trying for its passengers. He notes that PAL will make a strong push into the USA once its A350s arrive, and that carriers from China, Taiwan and South Korea have all enticed Filipinos with attractive fares for one-stop services to America.

“We think that there’s a really good opportunity there, with our philosophy being to go where the Filipinos are,” he says. “There are so many Filipinos on the West Coast. There must be at least a few hundred thousand in San Francisco and almost a million in Los Angeles.”

The carrier will consider a two-class configuration on its new-generation widebodies. Its current A330-300s are among the tightest in the market with 436 seats, and there are no plans to reconfigure any of these jets.

“We pride ourselves on being conservative in terms of fleet introduction plans. Every single order we have, we know where we are going to base them, and that approach has paid off. This is especially since we have no intentions of being an operator outside of the Philippines.”

Cebu Pacific has doggedly focused on being the top performer in its home market, and is now the third largest low-cost operator in Southeast Asia, behind Lion Air and AirAsia. Unlike its overseas counterparts, the carrier has no plans to deviate. Gokongwei says Cebu Pacific will not set up shop overseas, being too late to the game, nor has it any desire to contemplate a full-service arm to break PAL’s grip on the premium market.

Asked about the airline’s recipe for success, he says: “We’re very clear about what we are. We’re an LCC and we try and keep our operations as simple and repeatable as possible.”

It invests heavily in technology, being the first airline in the Philippines to offer internet booking. It is also developing booking and customer service functions for mobile and social media platforms.

He believes one of Cebu Pacific’s greatest strengths is its strong brand loyalty. Despite fierce competition with other LCCs in the market, it consistently gets better yields and loads.

The airline is well known for its witty slogans, flash sales and pocket-friendly prices. Flight attendants get passengers to play simple games in flight where winners can receive Cebu Pacific merchandise. On a recent flight, passengers who produced a picture of their spouse received a free Cebu Pacific pouch.

Cebu Pacific now has close to 4,000 employees, many of whom are young and ambitious. When FlightGlobal visited its headquarters, most employees were wearing bright yellow Cebu Pacific T-shirts. The open-concept office exudes a fun and creative atmosphere, with bright murals on the walls, and even a board game printed on the boardroom’s 24-seat conference table.

Gokongwei believes that the Philippines remains an attractive market with a growing economy, and his aim is to ensure that the Cebu Pacific brand maintains its dominance in the country.

“Going forward we have to continue to adapt as a business, but the basic model of providing affordable fares to our passengers remains. There’s still plenty of underlying demand. The country is growing at 7% a year and people’s aspirations to travel will be 1.5-2 times that,” he says.

“We have rebranded Cebu Pacific to try and be more representative of a more global and confident Philippines, which feels at ease with the entire world. That’s where we are headed.”