Central European budget carrier Wizz Air ended 2021 with passenger numbers in December up on the previous month, although the figure of nearly 22 million customers carried during the calendar year was still 45% below pre-crisis levels.

Wizz flew 21.7 million passengers last year, an increase of 30% on the prior year. However, it was still only a little over half the nearly 40 million passengers the airline flew in the 2019 calendar year as Covid restrictions again took their toll. 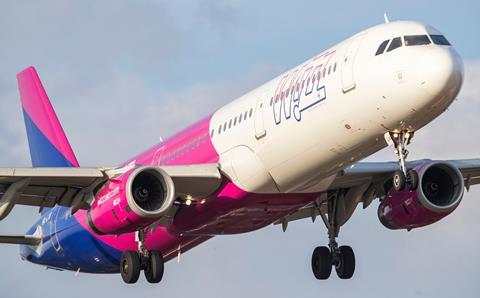 Wizz has been one of the most proactive European carriers in returning capacity since Covid-related travel restrictions began easing after the tight lockdowns of the first part of 2021. Monthly passenger levels reached almost 3.6 million in August during the summer peak and were still at around 3 million in September and October.

Load factor of 75.4% for December was four points down on October levels, illustrating the tougher demand climate.

Wizz load factor for the full-year of 75.2% is a fractional improvement over 2020, but remains well down on the 93.6% load factor it reported for the 2019 calendar year.

Wizz is the first European carrier to report calendar year passenger numbers for 2021.