Boeing yesterday shuffled the line-up of the 787s on the final assembly line in , to make room for a flight test airplane arriving later this month.

The 787 designated for fatigue testing was moved out of the final assembly factory to another production bay, which was not disclosed. The fatigue test airplane is not yet complete and assembly work will continue in the new location. 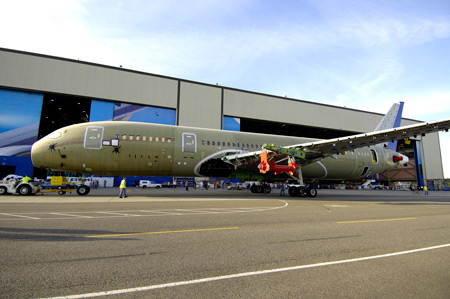 Vought Aircraft has already shipped the aft fuselage sections for the fourth flight test aircraft, and shipments from Spirit AeroSystems of the nose section and from Global Aeronautica of the centre fuselage were scheduled to arrive in on 19 June.

The first flight test aircraft remains in the nose-to-door position on the assembly line.

Boeing completed the one-week sequence of power-on tests for the first flight test aircraft on 19 June. First flight is scheduled in the fourth quarter this year.