Airbus and Embraer both see an opportunity to sell their small narrowbody jets to carriers keen to tap the emerging market in western China.

Speaking during a media briefing at Airshow China, Airbus’s head of single-aisle marketing, Amaya Rodrigues Gonzales, says that the government’s plan to open up the high altitude areas of the country’s west for further development will rely on aviation, as trains and roads are not feasible in those regions.

Furthermore, the A220’s hot and high performance, smaller capacity than other narrowbodies and long-range are expected to be a good match for some of the operating and commercial challenges in the region.

Airbus is displaying an Air Baltic A220-300 at the air show, the first leg of an Asian sales tour that will also take it to Chengdu, Koh Samui and Istanbul before returning to the carrier's Riga base. 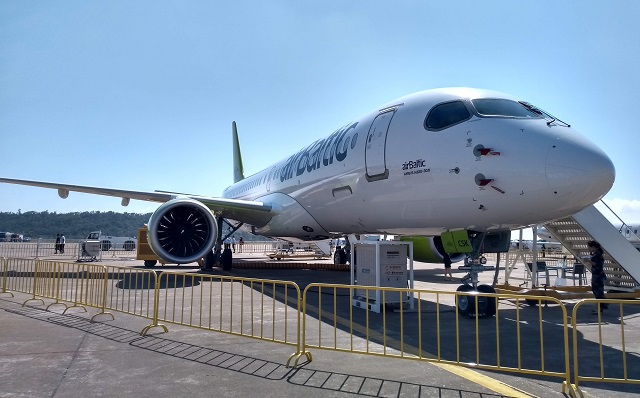 The A220 has yet to garner any firm orders from China, although Flight Fleets Analyzer shows that there are letters of intent to order 30 A220-100s and 20 A220-300s from Loong Air and CDB Aviation Lease Finance.

However, Airbus is not alone in targeting that market, with Embraer also highlighting the capabilities of the E190-E2 to help airlines access the western China market.

It has already completed demonstration flights into and out of Lhasa, and says that the E190-E2 can fly nonstop from Lhasa to Chengdu with a full load of passengers.

“The E2 will be able to connect tier II and III destinations here in China. It can bypass hubs and most importantly it can offer smaller airplanes in the market, complementing narrowbodies at comparable seat costs,” said Embraer’s head of commercial, Arjan Meijer.

The Brazilian airframer is displaying its ‘profit hunter’ E190-E2 featuring its shark livery on the static line at Zhuhai. After the show finishes, it will embark on a two week sales tour across the country.

“We will show the advanced technology, we will explain everything about the exceptional hot and high performance for the many high, elevated airports here in China,” he adds.

Embraer is also targeting other opportunities in China with its wider portfolio of E-Jets. During a media briefing, vice-president of sales and marketing for Embraer China, Gao Qing, noted that the E175-E1 was the “best choice for startup airlines.”

At the larger end, the airframer claims that its E195-E2 is ideally suited to low-cost carriers.

Overall, Embraer predicts that over the next 20 years there will be demand for 1,390 jets with up to 150 seats in China. It cites plans to open 140 new airports across the country by 2035, and a growing need for airlines to bypass congested hubs as major drivers of that demand.