Rolls-Royce expects to hit key milestones for its big two in-development engine variants this year, with first flight of the Airbus A350-1000’s Trent XWB-97 expected in the third quarter and certification of the Trent 1000-TEN for the Boeing 787 earmarked for November or December.

A third new programme – the Trent 7000 for the new Airbus A330neo – will begin ground testing this year, too, ahead of flight testing in 2016. The 72,000lb (320kN) powerplant is based on the Trent 1000-TEN. Both aircraft and engine were announced at Farnborough last year.

R-R expects the TEN to enter service in the second half of next year. The name originally caused some confusion, suggesting it was a version of the Trent 1000 for the in-development 787-10. Instead, it stands for “Thrust, Efficiency and New technology” and will be available for all three 787 variants. R-R plans to have transitioned all its Trent 1000 production to the TEN by 2017, in time for the entry into service of the third and largest version of the 787.

Although General Electric’s GEnx has a market share advantage in 787 orders and deliveries of almost three to two, R-R believes it has momentum on its side. “We have 49% of operators and, out of the last 18 order competitions, we have won 12,” says Gary Moore, Trent 1000 project director. The UK company also has bragging rights in terms of powering the first 787-8 and 787-9 in service.

The TEN adopts technology from the Trent XWB not found in earlier versions of the Trent 1000, including the A350 engine’s compressor and extra stages of blisk, as well as a new high-pressure turbine architecture. The advantage of this work, says Moore, is that “it derisks the programme for Boeing” when it comes to putting the 787-10 into service. “They are not going to have to put a new engine on a new programme.” 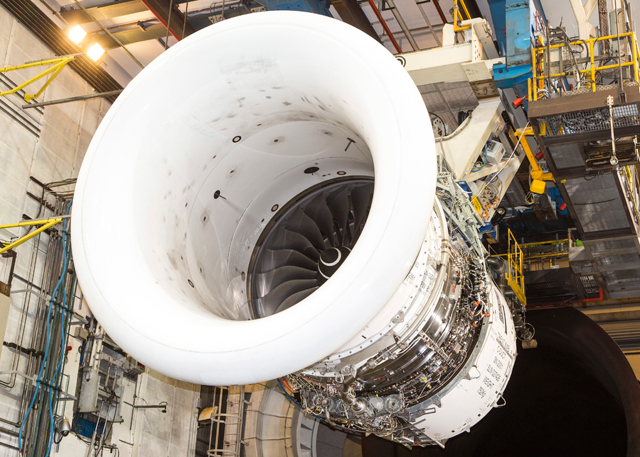 Testing on the TEN continues, with flight testing on a Boeing 747 flying testbed due to begin at Arnold air base in Tennessee in a few months “to demonstrate that everything we’ve learned at sea level works at altitude”, says Moore.

R-R insists the TEN will deliver 2% additional fuel economy over the current “package C” engine introduced in the middle of last year. That version was an upgrade of the original “package B” on the original 787-8s. Operators with the earlier variants will be able to replace their older engines, and fly with a TEN and “package C” on either wing, says Moore.

Meanwhile, 10 months after delivery to Airbus of the first Trent XWB-84 engines for the A350-900, and eight months after its first engine run, its sibling, the -97, is well into its test schedule, with a third example on its way to Manitoba, Canada, to begin ice testing, and a fourth about to be powered up for the first time.

“We will deliver the first flying testbed engine in quarter two and it will fly – depending on Airbus of course – in quarter three,” says Simon Burr, R-R’s director of the XWB programme. The largest version of the widebody is expected to fly – powered with Trent XWB engines – around summer next year, ahead of its entry into service in 2017.

By the end of this year, R-R expects to be building one XWB-97 a month, and with “well over” 70 -84s due to be delivered in 2015, production rates for both variants combined will have reached one a day. Both the XWB and the Trent 1000 are being built “vertically” on pulsing production lines, a first for the engine maker.