Delivery is nearing for the first AgustaWestland AW101 Merlin modified to a new interim HC4 standard for the UK Royal Navy, while work on the initial helicopter to receive the full upgrade has also just commenced.

To be operated by the navy’s Commando Helicopter Force, marinisation of a total of 25 former Royal Air Force Merlin HC3/3As is being performed by AgustaWestland at its Yeovil facility in southwest England under the £330 million ($510 million) Merlin Life Sustainment Programme.

It will see the rotorcraft receive a folding tail, folding rotor blades, and for all except the first seven examples, a new digital cockpit in common with the RN’s fleet of Merlin HM2 anti-submarine warfare helicopters.

The manufacturer says handover of the initial “phase 1” aircraft is due in the coming weeks, with the remaining six to enter service ahead of the 1 April retirement date of the service’s current Sea King HC4/4+ fleet. 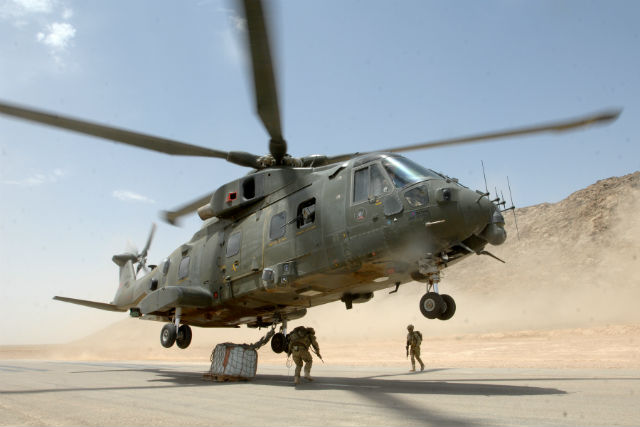 These interim examples will subsequently re-enter the modification process to receive the glass cockpit, with work due to be completed by 2020.

“The first [airframe for] full conversion is now in the factory and we have started strip-down activity,” it says.

It expects the full conversion to take 11 months for each aircraft, but hopes to cut this to eight or nine, it says.

AgustaWestland also remains confident of securing additional orders for its UK-built AW159 to avoid a production break in late 2016 or early 2017. So far only the UK – where both the army and navy operate the Wildcat – and South Korea have bought the 6t helicopter.

The manufacturer says it is “working hard to progress a significant number of opportunities” for the platform, the majority from existing Lynx operators. However, it concedes that these are mostly “single-digit numbers”.