Dutch carrier KLM has sealed state backed financing of €3.4 billion to help it through the coronavirus crisis under an agreement which is tied to conditions around cost reductions and environmental performance.

The Dutch government had in April pledged an aid package to KLM in the form of state guarantees and loans amounting to between two and four billion euros. 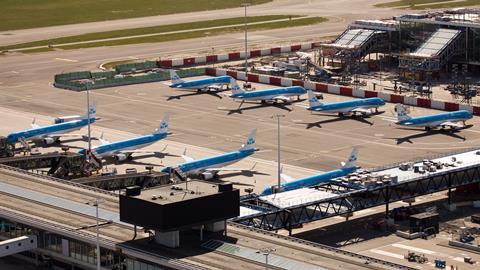 ”After careful discussions with both the Dutch state and banks, KLM has agreed on the structure of a financing package to ensure liquidity,” the airline says

The financial package remains subject to approval by the Dutch Parliament. Once that is completed the first €665 million will be drawn from the new revolving credit facility and used to repay and terminate an existing credit facility drawn in March. At that point KLM with also withdrawal a pro-rata amount of €277 million from the direct state loan.

”Follow-up withdrawals under both the revolving credit facility and the direct state loan are only possible if certain conditions imposed by the state are met,” the airline says. ”KLM will therefore draw up a restructuring plan that meets these conditions and determines the path for post-Covid-19 recovery. The plan also aims to review KLM’s current activities and adapt KLM to the changed economic reality.”

KLM chief executive Pieter Elbers says: ”The financing package is necessary to secure the long and difficult road of recovery in the coming period. This is a very important step and I express my gratitude on behalf of all KLM colleagues to the Dutch state and the banks for their confidence in our organisation and our future.

”In the coming period, we will be working on the restoration of the route network and, on the other hand, on the development of the restructuring plan and the far-reaching conditions that have been imposed on the package.”

In May the European Commission backed a €7 billion support package from the French government for KLM sister carrier Air France - comprising €4 billion in state 90% state backed loan guarantees and €3 billion in a shareholder loan.

In a statement detailing the financial support package, the Dutch finance ministry says it has been agreed with Air France-KLM that the unilateral notice period for termination of the so-called state guarantees, which safeguard Schiphol’s hub function, will be extended from nine months to five years.

”As the largest user of Schiphol, KLM is crucial for the airport. With the extension of the notice period for termination, there is more certainty for KLM and Schiphol and therefore the public interest of the Netherlands,” the Dutch finance ministry says.

”The government has set conditions for the financial support, such as a cost reduction by KLM of fifteen percent, a reduction in the number of night flights and an active contribution to sustainability,” it adds. ”To ensure that the implementation of the agreements made is monitored, the government has appointed a so-called state agent to supervise the use of the funds received.”

The conditions requiring the carrier to meet environmental target echo those set out by the French government as a condition of its financial support package to Air France.

KLM says once the financing is approved by Parliament, it will consult with trade unions on the conditions that the government has imposed on the employment conditions of KLM employees.