Thales UK is gearing up to begin flight tests of the heavily revamped and updated Cerberus airborne early warning system it is pitching for the UK Royal Navy’s Crowsnest competition.

The up-to-£500 million ($806 million) contest will see a total of eight AgustaWestland AW101 Merlin HM2 helicopters equipped with the mission kits, to replace the navy’s current fleet of aged Westland Sea King 7s, which will begin to be retired from 2016.

Lockheed Martin is prime contractor on the effort, with Thales and Lockheed itself competing to supply the radar and operator equipment. Despite this potential conflict of interest, Thales remains confident in the integrity of the contest, says Matt Avison, the manufacturer’s sales director for intelligence, surveillance and reconnaissance and defence mission systems.

“We have no concerns about Lockheed Martin running the competition,” he says.

Thales is proposing to take its Searchwater 2000 radar – which is utilised on the RN’s current Airborne Surveillance and Control (ASaC) Sea Kings – and adapt it for installation on the Merlin platform, as well as updating the radar, software and mission system “to drive out obsolescence”.

Avison declines to specify the performance enhancements Thales has brought to the radar, but points out that it is “not just about increasing range, but also increasing the utility of the radar”. He says: “The advances in processing since [the introduction of] Searchwater 2000 mean that we can do an awful lot more with the received information. That means we are not just compliant with the competition, but over-delivering in certain areas.”

Installation of the system on a test airframe will begin shortly at AgustaWestland’s Yeovil facility in Somerset, ushering in from the end of September an intensive period of ground evaluations, which will culminate in a first test sortie in mid-November, Avison says. 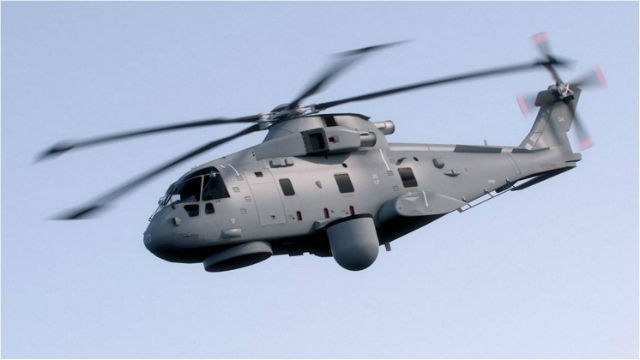 Around 30h have been allotted for flight tests, but Avison is confident “we can prove the system in less than that”.

Although the navy requires Crowsnest to enter service from 2018, Avison believes the “proven performance” and low risk of Cerberus enables it to be delivered well in advance of this date. This would allow the service to provide early warning protection to its new flagship, the aircraft carrier HMSQueen Elizabeth, from an early stage.

An updated operator console utilises three touchscreens, the main one of which is one-third larger than that on the current-generation system. Thales believes the revamped interface is more intuitive than its predecessor and quicker and simpler to use.

One issue still to be resolved, however, is whether Thales will persist with the ASaC system’s distinctive inflatable radome – AEW-roled Sea Kings are known informally as ‘baggers’ as a result – or switch to a solid design.

Lockheed, meanwhile, has recently started flight tests of its Vigilance system from the Ministry of Defence’s Boscombe Down site in Wiltshire. It is proposing a pair of Elta Systems-produced active electronically scanned array radars, installed on either side of the Merlin's fuselage. However, Lockheed declines to comment on the progress of its trials.

Bids for Crowsnest are due to be submitted by the end of January 2015, with a decision expected late in the first quarter of next year.