Thales UK is confident that a promise of early delivery, allied to claims of low cost and simplicity, will help swing the UK defence ministry’s Crowsnest contest in its favour following submission of final bids last month.

The winner of the around £500 million ($769 million) competition will outfit ten role-fit kits to outfit the Royal Navy's AgustaWestland AW101 Merlin HM2 helicopters with a new airborne early warning radar and mission capability. These will replace the service’s outgoing Sea King 7 Airborne Surveillance and Control (ASaC) rotorcraft which will be progressively retired from 2016.

Although facing competition from Lockheed Martin for the requirement – and confusingly the US firm is also prime contractor for the navy’s Merlin upgrade programme – Matt Avison, sales director ISR and defence mission systems at Thales UK, believes its “balanced” offer will prevail.

“We recognise that in this age of austerity there is not a lot of money to splash around on gold-plated solutions,” he says.

Thales has proposed a revamped and modernised version of its Cerberus system and Searchwater 2000 radar currently in use on the ASaC Sea King fleet. In contrast Lockheed’s Vigilance system uses a pair of active electronically scanned array (AESA) radars supplied by Israeli firm Elta Systems.

Avison warns that the navy cannot afford the risk of “having a technology demonstrator” replace its existing AEW coverage, particularly once the service’s flagship aircraft carrier HMS Queen Elizabeth enters service in 2018.

“Our view is that an AESA radar will not be sufficiently robust in the timeframe the navy requires and that it is not the most technically advantageous solution,” he says.

“This has got to work from day one. When Crowsnest comes in the Queen Elizabeth will be at sea and we can’t afford to be without force protection. We did that before [during the Falklands War] and it didn’t end so well.”

The UK defence ministry requires Crowsnest to be operational from 2018 when the last of the ASaC Sea Kings is retired. However, Thales says it can deliver a fully operational system 12 months ahead of schedule.

“We can offer operational capability before [Sea King] ASaC goes out of service,” says Avison. 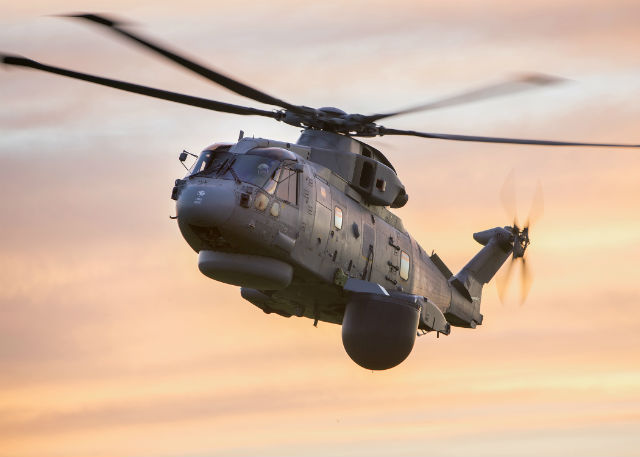 He points out that over 50% of the existing hardware will be re-used and that converting operators of the current system onto the upgraded variant will also be relatively straightforward.

Flight tests to check the fitment of the side-mounted, hinged radar assembly – which continues to use a distinctive inflatable radome - on the Merlin HM2 were conducted in November last year from AgustaWestland’s Yeovil facility in the southwest of the UK.

Around eight sorties were performed, says Avision, with no significant problems detected. “Two or three” minor issues have since been addressed, he says.

Final offers were submitted by both bidders to the defence ministry at the end of January, with a decision anticipated early in the second quarter.

And regardless if it is successful in the Crowsnest contest, Avison says there are “other nations interested in this solution” for both fixed- and rotary-wing platforms.