The UK remains on target to achieve initial operational capability (IOC) with the Lockheed Martin F-35B in late 2018, with its personnel training and testing activities gathering pace.

Eight of the 11 short take-off and vertical landing aircraft so far accepted by the UK are now supporting training at the US Marine Corps' MCAS Beaufort facility in South Carolina, with the activity involving 140 of its personnel. "By the end of this year it is planned that the UK will have 14 of these jets," the Ministry of Defence says. 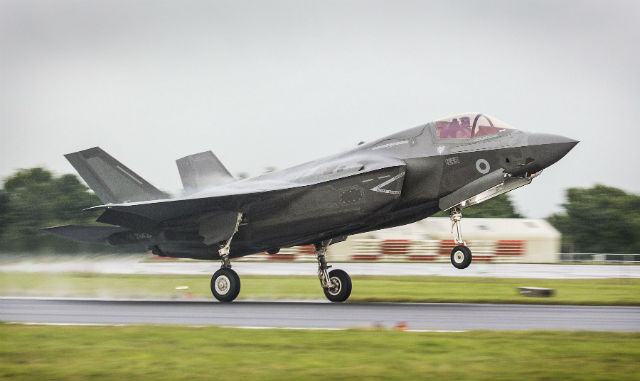 The Royal Air Force's 617 Sqn will be reformed in the USA early next year, before bringing nine jets back to the service's RAF Marham base in Norfolk by mid-year, says Air Cdre David Bradshaw, the UK Lightning force commander. The unit should secure IOC for deployable land-based duties by the end of 2018, he confirmed during the DSEI exhibition in London earlier this month.

In advance of the jets' arrival a new integrated training facility is beginning to take shape at RAF Marham, which will eventually accommodate four linked full-mission simulators for the F-35B.

Bradshaw says training activity on the UK's F-35Bs will be divided equally between live flying and synthetic-based instruction. He attributes this balance to improvements in simulation technology, and "restrictions in the live environment, such as security – not wanting to give away tactics, techniques and procedures".

Meanwhile, initial aircraft carrier flight trials are scheduled to take place off the US East Coast involving the Royal Navy's HMS Queen Elizabeth "in the autumn of next year", Bradshaw says. Maritime IOC is expected for the F-35B by the end of 2020, coinciding with the vessel's entry into service.

Simulator-based training will also be possible aboard the RN's two Queen Elizabeth-class carriers. The vessels have design space to accommodate a pair of deployed mission rehearsal trainers, each of which has two cockpits, enabling a four-ship formation of pilots to conduct mission rehearsal.

Build-up of the UK Lightning force will continue with the arrival at Marham in 2019 of the 207 Sqn operational conversion unit, followed by the establishment of a second frontline squadron – 809 NAS – in 2023.

"All squadrons will have a mix of both RAF and RN personnel," Bradshaw says. "This is very different to the [BAE Systems] Harrier force, which evolved over time, rather than being joint by design from the outset." Assistant chief of the air staff Air Vice-Marshal Mike Wigston says the MoD expects its joint Lightning force to eventually be comprised of 60% RAF and 40% RN personnel.

The UK has so far ordered 48 of its planned eventual fleet of 136 F-35s, and 18 of the aircraft should have been accepted by the end of next year.

BAE also recently hosted a multinational training activity at its Samlesbury site in Lancashire, during which F-35 pilots from the UK, Italy and the Netherlands rehearsed possible joint scenarios involving other aircraft types and ground forces, via desktop simulators. The company describes the activity as having included the provision of "digitally-aided" close-air support, using the F-35's variable message format datalink.