Online retailer Amazon is seeking to raise awareness of its entry into the air freight market, releasing a video and images of its first branded Boeing 767-300ER Freighter, an aircraft the company calls "Amazon One".

The aircraft, registration N1997A, will also fly on 5 August during the Boeing Seafair Air Show held near Seattle, where Amazon is based, the company says in an accompanying media release.

The video shows a time-lapse depiction of the aircraft at the paint shop. When finished, it has a white fuselage with "Prime Air" overlaid in blue letters. The aircraft's tail is painted black and highlighted with Amazon's logo. 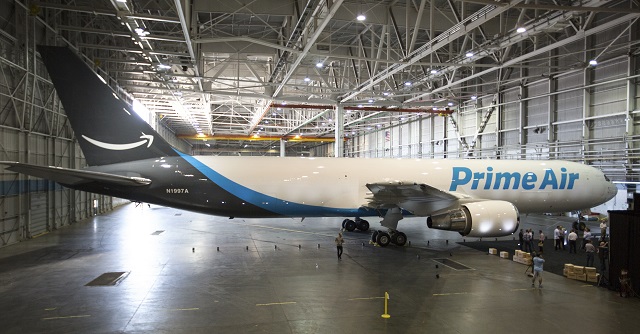 In recent months, Amazon signed agreements with Atlas Air Worldwide Holdings, which is the parent company of Atlas Air, and Air Transport Services Group (ATSG), under which those companies will each operate 20 767s for Amazon.

“Creating an air transportation network is expanding our capacity to ensure great delivery speeds for our Prime members for years to come,” says Amazon’s senior vice-president of worldwide operations Dave Clark in the release.

Eleven 767s are already flying for Amazon, the release says.

Aircraft N1997A was manufactured in 1994 and is powered by General Electric CF6 turbofans, according to Flight Fleets Analyzer.

Atlas announced on 5 May plans to acquire 20 767-300s for operation with Amazon. The freight company’s Titan division will lease the aircraft to Amazon for ten years, and Atlas Air will operate them for at least seven years, Atlas said.

Atlas expects to have the 20 aircraft flying for Amazon by the end of 2018, it has said.

As part of the deal, Atlas gave Amazon the right to purchase up to 20% of Atlas stock over five years, and the possibility to purchase another 10% of shares.

That deal followed an announcement in March that ATSG had reached an agreement to operate 20 767s for Amazon.

The ATSG deal gave Amazon the right to purchase 19.9% of ATSG’s shares.