Virgin space base plan allows for bigger ships in future

The New Mexico base selected for Virgin Galactic’s space tourism venture will have a 90m (295ft)-wide, 3,660m (12,000ft)-long runway to accommodate vehicles larger than the SpaceShipTwo (SS2) under development for the planned suborbital service. 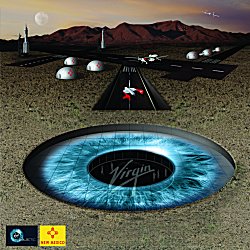 Plans for future, possibly orbital, spaceships has led Virgin Galactic to increase the size of the SS2’s carrier aircraft, White Knight 2 (WK2), which had been described as having the wingspan of a Boeing 737, but will now be the size of a 757. Both the SS2 and WK2 are being developed for Virgin Galactic by Scaled Composites, which built the suborbital SpaceShipOne.

“The runway width and length is because of what might come after SpaceShipTwo,” says Virgin Galactic president Will Whitehorn. The runway will be located 4,700ft above sea level at the $225 million New Mexico Spaceport, to be built near Las Cruces between 2007 and 2009. Apart from the runway itself, Virgin’s spaceport facilities will be underground.

First flights for Virgin Galactic’s suborbital service, expected to take place in late 2008, will be from Mojave Airport in California, where Scaled is based and where it will build SS2s and WK2s at a former BAE Systems hangar. The New Mexico location is the preferred centre for operations as it is not overflown by commercial aircraft, having a history of military aircraft and missile testing.

The local climate will allow 325 days of operations, says Whitehorn. Virgin Galactic has signed a 20-year lease on the spaceport, paying $1 million a year for the first five years and the full cost over the remaining years. The New Mexico state government is investing $135 million in the spaceport and obtaining the remainder from the US federal government and through local sales tax increases.