Orders for A321neo overtake those for A320neo

Airbus’s A321neo has overtaken its smaller sibling, the A320neo, as the most popular member of the re-engined family following the large order for the variant from Indigo Partners.

While the conventional A321 achieved only about a third of the order total of the A320, the A321neo has become the preferred model among customers of Airbus’s current single-aisle range.

Indigo Partners’ agreement for 255 A321neos unveiled at the Dubai air show took total orders for the variant to 3,958 compared with 3,748 for the A320neo.

Total A320neo orders have previously topped 4,000. But there has been a trend of migration to the A321neo from carriers which had originally placed orders for smaller models.

Airbus has developed enhanced versions of the A321neo, reconfiguring its exit door structure to accommodate more passengers, and extending its range with the A321LR and upcoming A321XLR.

Indian carrier IndiGo and Malaysia’s AirAsia are among other major customers for the A321neo. 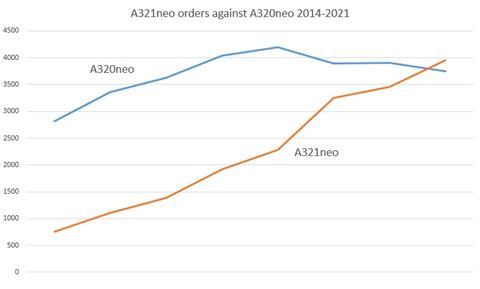