ATR will steadily ramp up output of its twin-turboprop aircraft over the next three years as it targets annual deliveries of 50 units in 2024 on the back of a recovery in regional aviation demand.

In 2021, the joint venture shipped 31 new aircraft – more than triple the 10 units it handed over in Covid-hit 2020 – and chief executive Stefano Bortoli expects the delivery total to rise again this year, to somewhere in the “mid-to-high 30s”. 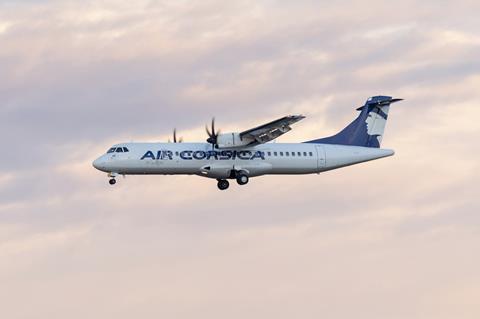 Bortoli, presenting the firm’s 2021 performance earlier today, said that although the market is “not yet stable” with “plenty of volatility” in different countries, ATR remained “very optimistic”.

“We have invested in our products, we have improved our offerings, which are coming to the market at the right time,” he says.

Meanwhile, development continues for the 42-600S, the short take-off and landing (STOL) version of the smaller of ATR’s two aircraft.

Bortoli says the 42-600S is now in the “industrialisation phase” and a maiden sortie is expected “in the spring”. That will lead to certification in mid-2024, followed by service entry later that year.

ATR took in 35 gross orders last year, offset by three cancellations, leaving a backlog of 196 aircraft at the end of 2021, says senior vice-president of commercial Fabrice Vautier. Additionally, the airframer is not sitting on any ‘white-tail’ aircraft, says Bortoli.

Vautier forecasts a replacement market for 1,200 passenger turboprops in the 30-70-seat range over the next 20 years, although many at the smaller end will “need immediate replacement”, he says.

In addition, ATR sees a requirement for 460 freighters with a payload of up to 9 tonnes over the next two decades.

Vautier says there are currently 140 ATR freighters in service, including the six 72-600s it has delivered to FedEx since the first example was shipped in late 2020; 17 passenger-to-freighter conversions were also handed over last year.

Demand is being driven by the boom in ecommerce, where ATR “provides the solution for the last airfreight leg”, says Vautier.

Consideration is being given to the development of a combi variant of the twin-turboprop to support operations on thin routes where there is also demand for the transport of essential goods, Vautier adds.

“We are evaluating different solutions; today there is no firm decision but there is clearly a need for such an aircraft.”

However, Vautier rules out the potential for a stretch of the 72-600 to address the market above 78 seats, the type’s current maximum accommodation.

“We don’t see a need and don’t have a plan for a bigger turboprop right now,” he says, noting that post-pandemic, airlines consider costs per-trip rather than per-seat as a more important metric.