Still, aerospace analysts view the Max as having a viable future and say cancellations also benefit Boeing by easing backlog pressure that has intensified since the twinjet’s March 2019 grounding.

“These cancellations actually offer Boeing some relief. They now have a bit more breathing space in the schedule,” says Ascend by Cirium head of valuations George Dimitroff. “They can do a better job of juggling everybody else’s deliveries.”

Ronald Epstein, managing director of aerospace and defence at Bank of America Merrill Lynch, says cancellations reflect lessors’ eagerness to avoid placing jets with airlines at depressed lease rates. “I don’t think anybody wants to be the first lessor to place the airplane” in the current environment, he says.

Analysts say Max values started declining well before the coronavirus pandemic. They doubt the airline industry will return to 2019 traffic levels until perhaps 2023, meaning aircraft values will remain depressed for the foreseeable future.

Since the start of the year, Boeing’s Max backlog has lost 289 jets due to order cancellations and order conversions to widebodies, according to information released by Boeing, airlines and lessors.

Lessors and finance companies accounted for most of those changes. Cancellations include: CDB Aviation (29), GECAS (69), Avolon (75), and Japan Investment Advisor (10). Air Lease, meanwhile, converted nine Max to three 787s, according to available information.

Additionally, to align with accounting standards, in March Boeing removed another 139 Max from its backlog. Those orders remain under sales contracts but Boeing has less confidence the deals will close, it says.

Boeing did land new orders for 18 737NG-based military jets in the first quarter. The company’s 737 backlog at the end of March, not excluding the CDB and GECAS cancellations in April, stood at 4,079 jets.

Customers that cancelled orders have stressed they remain committed to the Max, and Boeing says it still holds orders for roughly 370 Max from those lessors involved in the recent terminations.

In the last year, Boeing converted 51 Max orders to 18 widebody orders and has otherwise “worked to rebalance” the Max’s lessor exposure. Such moves give the airframer greater flexibility to manage deliveries and help “protect” Max values, it says.

“Where it has made sense, we have adjusted our orderbook to line up with the fact that we have been building fewer Max airplanes than planned,” Boeing says. “In light of the unprecedented impacts from the Covid-19 pandemic, these adjustments also help restore supply and demand in the market, especially in the leasing channel.”

Lessors hold a particularly large share of the Max backlog – 943 aircraft, about 20% of Boeing’s current outstanding Max orders, according to Cirium data. That figure may be even higher, as Cirium data shows 721 orders from undisclosed customers, although it also does not reflect all the recent cancellations.

Analysts say 737 Max lessors face unique pressures. Many leasing companies ordered the Max in 2012 or 2013, shortly after the programme was launched, when the market was booming and fuel prices were higher, making the Max’s efficiencies more valuable. Sales contracts typically include annual price escalations of 2-3% until delivery, says Dimitroff.

Max values began slipping after the type’s second crash in 2019 and its subsequent grounding, and have declined further since.

But depressed Max values have left lessors struggling to place those aircraft at lease rates commensurate with contracted purchase prices.

“You have a terrible lease rate factor and a terrible return on that investment, which doesn’t really cover the risk,” says Dimitroff. 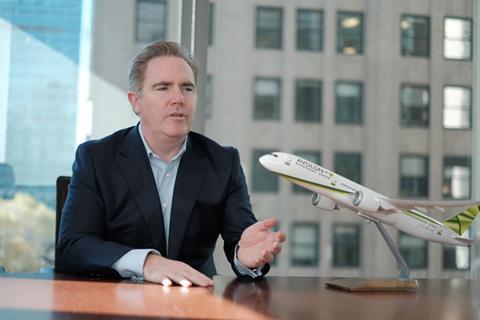 Dimitroff doubts Max values will climb above $50 million again – unless fuel prices surge to around $100 per barrel, passenger demand returns to pre-coronavirus levels, lessors jettison more aircraft and lease rates recover to about $340,000 monthly. “Even then, competitive pressures could prevent higher pricing,” he says.

In normal circumstances, loss of deposits dissuade customers from cancelling orders. One year prior to a delivery, customers might have paid deposits equal to 20% of an aircraft’s list price, equating to roughly $24 million in payments on a 737 Max 8, Dimitroff notes.

These are not normal times, however. In addition to the Max issues, the coronavirus pandemic has led airlines to ground thousands of jets. The fleet of stored passenger aircraft now stands at about 14,500, roughly two-thirds the global fleet, according to Cirium.

But it was the Max grounding that made cancellations viable for some customers. All aircraft sales contracts include provisions allowing customers to walk away from orders without a penalty (and with deposits returned) if deliveries are delayed by six to 12 months.  Leasing companies, in turn, afford similar rights to airline customers, says Dimitroff.

The Max has been grounded since 13 March last year - a period now stretching towards 14 months.

“Lessors don’t want to take delivery in this environment,” says Dimitroff. “If you have the right to walk away, why not walk away?”

Boeing declines to discuss the provisions in its sales contracts.

Those “walk away” clauses make further lessor cancellations possible, if not likely, say analysts. However, they suspect lessors will retain some Max orders and possibly place additional commitments in the future.

Boeing also faces the prospect of losing more Max orders from airlines, though analysts see orders from major US carriers as safe.

“I would imagine the major US carriers will take their planes, it’s just a matter of when,” Epstein says, adding that airlines must plan beyond the current crisis.

Norwegian has cancelled some 85% of its flights and was struggling before the coronavirus crisis, VietJet relies heavily on the hard-hit Chinese tourism market, SpiceJet is grounded until at least 3 May and while Jet Airways suspended operations in 2019, Boeing still counts its orders in its backlog.

“There are definitely some airlines in the order book that are on the edge,” says Dimitroff.

Still, he estimates that 80-90% of Boeing’s Max backlog is secure. “The industry as a whole needs these orders, even if it takes three years… or even four years, to return to 2019 levels,” he says.