The airline has reached the deal with Griffin Global Asset Management.

Delivery of the 737s is scheduled to commence in June and the lessor says the agreement covers several of Akasa’s initial aircraft.

Akasa chief executive Vinay Dube says Griffin has demonstrated a “high degree of confidence” in the airline’s plans, and adds that the leaseback is a “testimony” to the carrier’s “robust and sustainable future”.

The airline has ordered 72 737 Max jets and intends to commence operations this summer. 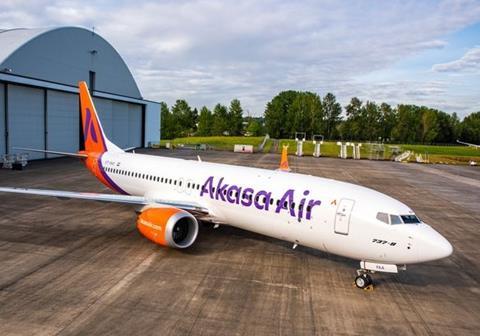 Akasa has 72 aircraft on order

Akasa aims to expand its fleet to around 18 aircraft by the end of March 2023, as it develops a domestic Indian network.

The Mumbai-based airline says it has an “employee-centric philosophy, tech-led approach, and culture of service”.

Griffin chief executive Ryan McKenna states that Akasa has developed a strategy that “addresses a need in the market”, adding that it has “assembled a very impressive team to execute that plan”.