Azimuth set to become first A220 operator in Russia

Russian carrier Azimuth is set to become the first operator of the Airbus A220 in the country, following an agreement for six unveiled at the Moscow MAKS 2021 air show.

The aircraft, the larger -300 variant, will be acquired through US lessor Air Lease.

Azimuth says it will receive the twinjets – powered by Pratt & Whitney PW1500G engines – from mid-2022, with the deliveries running to 2024.

Azimuth says the aircraft will be configured in a single-class layout with 148 seats.

It will use the type on both domestic and international routes, operating them from Rostov, Krasnodar and Mineralnye Vody. 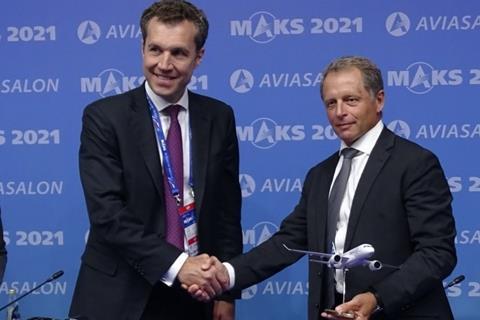 “With the introduction of a new type of aircraft, Azimuth will have the opportunity to develop its internal route network – including destinations to Siberia, as well as international destinations to the CIS, Europe and the Middle East,” says Airbus.

Azimuth currently exclusively uses the Sukhoi Superjet 100, and has reached an agreement at the MAKS show to introduce another 10 of the type.