MNG takes second converted A330 and indicates plans for A321 freighters

Turkish cargo carrier MNG Airlines has taken delivery of a second converted Airbus A330-300 freighter from modification specialist EFW, and indicated plans to introduce A321 freighters.

The aircraft – MSN889, registered TC-MCN – brings the operational fleet of A330P2Fs from the programme to 20.

It has undergone conversion over the last seven months.

The twinjet, powered by Rolls-Royce Trent 700 engines, was originally delivered to China Southern Airlines in 2007.

“With [this aircraft] we will serve a wide range of customers and routes, both scheduled and charter,” says MNG general manager Sedat Ozkazanc. 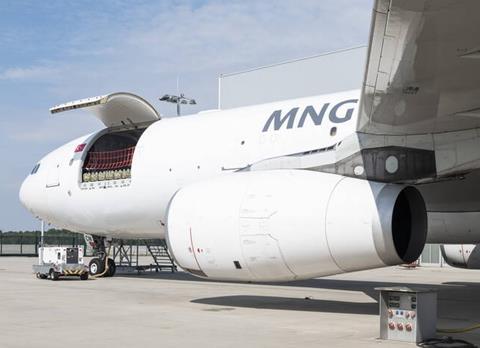 EFW says the airline’s expansion plans include increasing capacity with converted A321 freighters, “due to market demand”.

The carrier currently has an all-Airbus widebody fleet with a mix of A330 and A300 freighters.

MNG had ordered four new A330-200Fs directly from Airbus more than a decade ago but only took delivery of one.

It scrubbed the order for the remaining three and opted instead for converted A330-300s. The first aircraft – MSN879, also an ex-China Southern jet – was put into operation at the end of last year.

EFW says this aircraft has accumulated nearly 3,000h since conversion and transported over 12,000t of cargo with services between China, Turkey and Europe.