Norwegian operator Flyr is halving its operational fleet for the winter, reducing its route network, and shedding personnel in order to slash costs in the face of higher fuel prices and inflationary pressure.

Unprofitable routes will be put on hold, says the carrier, and the airline will only retain enough staff to operate five or six aircraft over the winter.

Flyr chief executive Tonje Wikstrom Frislid says the winter season will be “demanding” as the economic situation is likely to reduce consumer spending.

“Our decision to make use of furloughs is based on thorough assessments and in dialogue with union representatives,” says the carrier.

“Employees may be furloughed full-time or part-time in several stages, depending on how the situation develops.”

It says it intends to put in place voluntary arrangements to reduce the extent of the furlough and retain as many staff as possible. 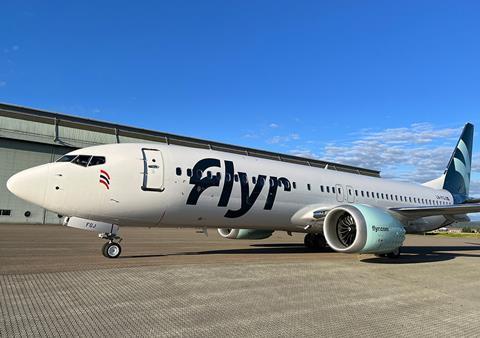 Frislid insists the company has “no other option” than to cut back its operation.

“We must admit that it has taken longer than expected to build loyalty among business travellers on domestic routes in Norway, where the incumbent carriers maintain large market shares,” she says.

Frislid adds that the carrier has experienced delays in developing distribution arrangements with travel agencies to tap this business market.

Domestic Norwegian routes will be reduced to a “minimum” for the winter, the carrier states, but it intends to continue serving “a selection” of “popular” European destinations.

These will include Alicante, Malaga, Las Palmas, Barcelona, Roma, Paris, Nice, Berlin and Brussels. The airline will offer domestic links from Oslo to Bergen and Trondheim.

“By implementing these measures, we will be well-positioned to ramp-up with full force for the coming spring and summer,” claims Frislid.

Flyr believes it can halve winter costs as a result of its decision, reducing cash burn by NKr400 million ($38 million). The reductions will run until March next year, and all routes on sale from April 2023 will be operated as planned.